My theory, which I have no intention of trying to prove, is that starting from Mexico City, you could take a succession of combis to any community in the country. You would, of course, have to transfer vans every half hour or so, and in some rural areas there might be a long wait. But in the course of a week or less, a person could hop on and off these microbuses, village by village, town by town, until they came to the border.

And the price would be ludicrously low. Here, the 25-minute trip from the village to the town costs eight pesos, or 60 cents Canadian. 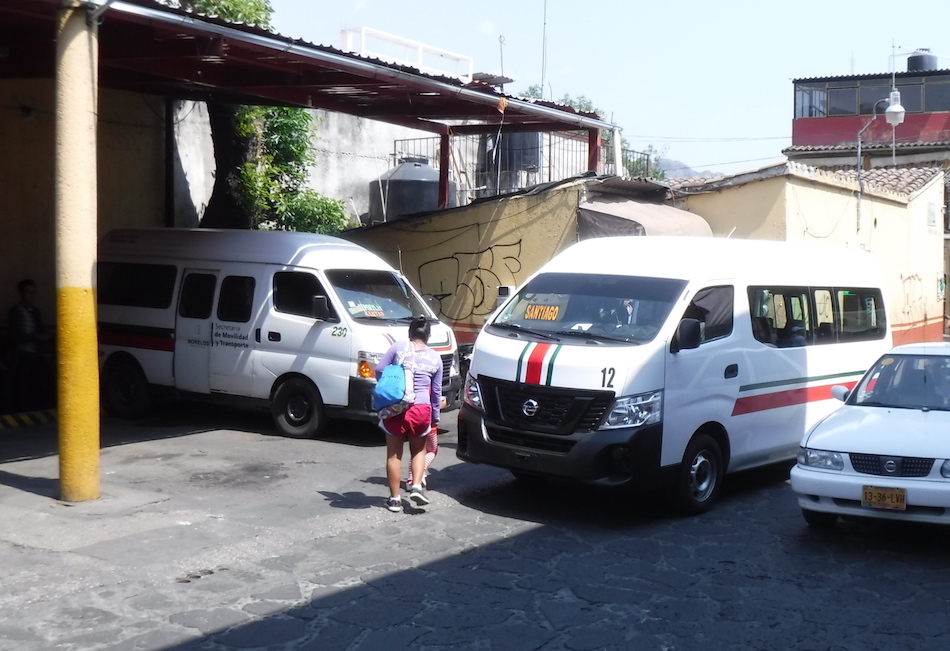 A combi picks up two passengers, on a quiet day in Tepoztlan.

The term ‘combi’ derives from ‘combinacion.’ They’re multi-purpose vans, with bench seating arranged around the four sides of the interior. In Tepoztlan, a few of them are battered and noisy, and could date back to the 1980s. But the majority are more recent, and the drivers clean them after each round-trip to outlying barrios and villages.

What attracted me to combis at first, apart from their ubiquity as transportation, was the eavesdropping possibilities. People on a Canadian bus, unless they get on together, ignore each other. On the combi, you can’t avoid neighbours and relatives, and you don’t try. That means an eavesdropper can listen to trivial exchanges about how the husband and kids are doing, and if Marco has found a job yet. Doing this helped me to stumble through Spanish grammar, which has 12 times more irregular verb endings than Baskin-Robbins has flavours.

You don’t just go somewhere on a combi – you interact. You get on and say “Buenos dias” to everyone, and call out a “Gracias” to the driver when you get off. There are a few official stops, but you can request to be picked up or dropped off anywhere along the route.

Last month, four or five Canadian women were on the combi from town to our village of Amatlan. Their conversation became tense, so I chimed in and asked if I could help. One woman explained that they knew where they wanted to go, but didn’t know how to get the bus to stop.

People wanting to get out will call out various things, such “At the corner,” “The next laneway,” or “The grocery store,” but the simplest, all-purpose word is the Spanish imperative, “Bajan.” So, I explained this, but the woman closest to me couldn’t catch the word.

She failed again to mimic the two syllables, and her friends all joined in with a loud, corrective chorus.

The alarmed driver screeched to a halt, concerned he’d not heard missed an earlier request for a stop. The grinning locals on the combi told him to drive on.

“Well, at least we know it works,” the Canadian group’s optimist said sheepishly.

Anywhere else, people could get angry. But on the combi, you have to take an upbeat attitude to being in a confined space, having a bumpy ride down a country road, and it was clear the joke would be repeated round a half-dozen dining tables that evening.

Combis at the base in Tepoztlan.

While people will yield a seat to an elderly person at times, it isn’t as usual as you’d expect in such an otherwise well-mannered society. Schoolkids rarely give up seats, and they aren’t usually prompted to do so by adults. Most combis have 12 to 16 actual spaces, but at certain times there will be five small kids on parents’ knees, and six more of us jammed in, standing. The drivers are surprisingly competent and professional on the whole, but I’d never want to be in an accident under those conditions.

And often, the ceilings of the combis are low, and if I do have to stand, I have to bend my neck. There is an overhead rail to hang onto, but my arm is at an odd angle as I do so.

So, apart from the linguistic eavesdropping opportunities, why am I writing about them? They’re cramped, they’re uncomfortable, and on a hot afternoon, they can be like mobile greenhouses. And not everyone on them has had a shower that morning…

There used to be eight or nine routes running from the little Tepoztlan depot: now, there are over a dozen. Mexico does certain things really well, and public transportation is one of them. The system works, it’s cheap, and, as I said at the start, you can use combis to get any place. Mexico finds ways to do things inexpensively because it has to. I often think that if the other two nations of North America should collapse under the combined weight of debts and deficits, and intensifying social dissensions, Mexico will just figure out some way of making things all hang together on its own.

Combis inch through the streets of the city of Cuautla.

It might produce a noisy, rattling, smelly solution. It will probably be a little uncomfortable. But in the same way people here can keep a 25-year-old family car on the road, or hook up an eight-year-old computer in an internet cafe and have it connect to the ‘net, Mexico will find the basic solution, and won’t fret over the prettier details.

So, for me combis are a simple but proud symbol of those survival skills. I’ve avoided the expense of owning a car, while complimenting myself on my lowered carbon contributions, although I try to walk as much as possible. But combis, beyond their physical utility, embody the fact that Mexico will always come and help you on your way, provided you’re polite, and patient, and accept that what you get will be workable, not perfect.

One thought on “The Ride Around Town”