The view of the trees is still clear in memory, just as the trees themselves were so clear to see that morning. As the jet glided slowly towards Humberto Delgado Airport, making no discernible sound, I could see the branches of jacaranda trees a few hundred feet below me, covered in splendid masses of pale violet flowers. They surrounded a group of large, gracious old homes, and their size and the spread of their blooming branches was truly gorgeous. The plane banked over central Lisbon, as even more details of the trees came clear, and I thought what anyone in a plane would think when they can see flowers on a tree below them and there’s no noise from the jets: this plane isn’t flying high enough because the engines have failed, and in sixty seconds we’re all going to die.

That was twenty years ago, so no, die we didn’t. I hadn’t known Portugal’s main airport was actually within the city it serves and not, as is more common, on its outskirts. The trip was memorable for other reasons too, including my nearly annihilating my liver during the most heroic evening of wine-guzzling I ever had. But that’s another story: let’s stick with the loveliness of jacarandas for now.

To be exact, the flowers of Jacaranda mimosifolia are often referred to as being not violet, but pale indigo. To look at, their hue is soft and refined, with a hint of grey in it that gives the tree a misty, dreamy look. Here in central Mexico, where the trees are native, they’re often grown alongside bugambilia (‘bougainvillea’ in the US and elsewhere), whose colourful bracts – flowers that aren’t actually flowers, but are coloured leaves around actual flowers – are quite different to the blooms on a jacaranda. Bugambilia’s almost fluorescent reds, purple-reds and orange-pinks are brash and cheerful, and they last all year. They’re also fun to observe, because they attract hummingbirds.

Jacarandas, on the other hand, flower sometime in late February, and the display lasts for just a couple of months. I don’t see hummingbirds around them much. They appear in the warmest, driest part of the year, and people welcome them for that reason. Each tree, with its thousands of small flowers, seems to shed them constantly, so there’s a carpet of discarded pale violet around each tree. 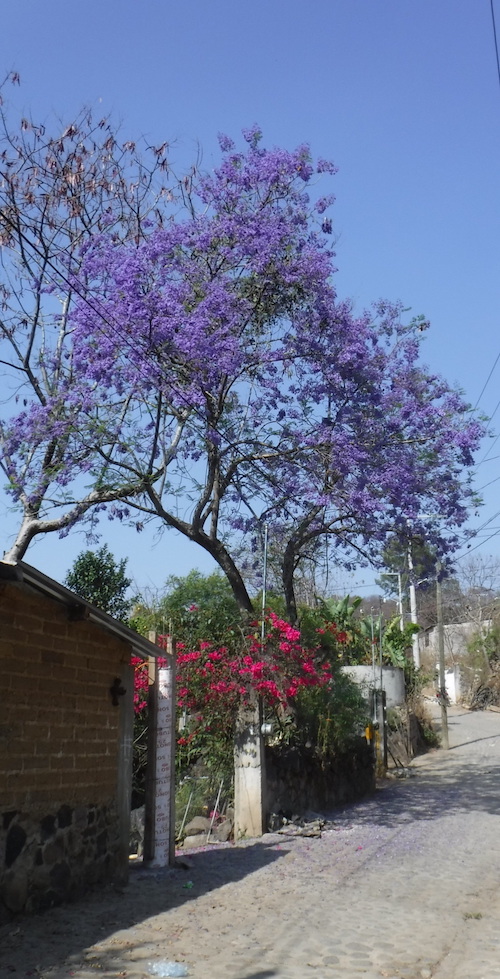 A jacaranda looms over bugambilia in my neighbour’s front yard.

Violet, or indigo if I must say that, is an odd colour for me. The brightness of a bugambilia is aggressively extrovert, and energising. People like to plant shrubs of the different varieties, for their near-luminous effect in daylight. Violet, by contrast, seems to pull me in, and if I’m inclined to resist it, the effect feels claustrophobic. It’s a refined colour, that I sometimes associate with ultra-polite old ladies and homes where you fear to scuff the carpets.

Tangential to this impression, yet connected, is the second time I ever encountered a mass of jacarandas, which was in Los Angeles. I was suffering from jet-lag, and the line of flowering trees stretching down a West Hollywood street made me feel literally nauseous, so that I had to look away. In that city of excess, the jacarandas enhanced the excess, they didn’t mitigate it.

Here, where the excesses and bustle of LA are not an issue, I love to see them blossom each year, like an old friend who shows up unexpectedly from time to time and is immediately subject to an enthusiastic fuss. The first time I saw one in bloom last month, I felt a warm tug inside, and a sense of having come back to something.

The tree is appreciated around the world. It shows up in Bhutan, Australia, South Africa, Israel, Spain and, of course, southern Portgual. Its height (twenty metres, or 66 ft, I read, but I think it can go still higher) and spread are imposing. It has some antibiotic properties when treated right, and the flowers can be employed to make a dye. But these are not unusual things for a tree.

Perhaps their understatedness is Mexican in the most refined sense, without the obviousness and vibrant colour that are more usual here. They hark back to a time when there were no diesel trucks on the highways; not even many highways. They have class, reserve, and style without self-promotion.

After drafting most of this piece, I rode into town today, noticing the trees in gardens and fields along the route. I expected the writing to have given me a more objective attitude, but instead, it enhanced the positive responses I felt. I could no longer remember exactly how the nausea gripped me in LA, but I did recall one reaction I had over Lisbon.

“Those are such lovely trees to see before we die,” I thought. It was possibly a gambit to calm myself, but it was simultaneously a genuine response to the late morning sunlight hitting a mass of flowers that were extravagantly generous in their quantity and vibrancy.

I notice, just too far away to take a decent group photo from this house, that there are three jacarandas blooming in the garden around the village church. I’m quite sure they weren’t planted there because no alternatives were available.