Once a year, in the fourth week of July, this village of Amatlan de Quetzalcoatl erupts in a celebration of its matron saint, Maria Magdalena. It’s the time of year when I have more homicidal thoughts than any other. In fact, all the murderous fantasies I have come out during these few days. 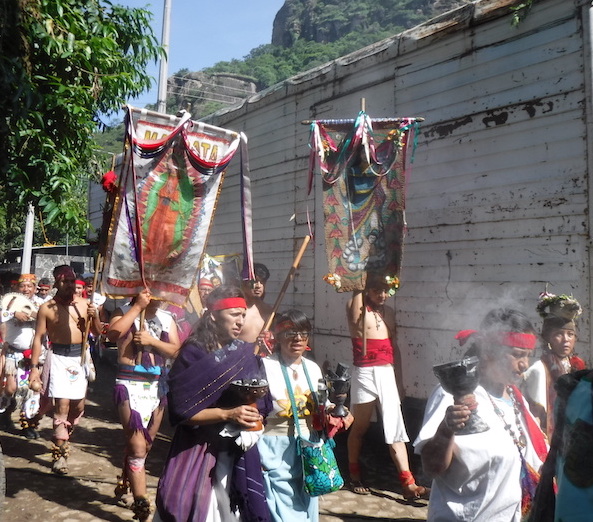 People in traditional Toltec dress, bringing banners and smoking copal incense, parade around the village to the accompaniment of post-Toltec rockets.

It’s the rockets. Since I typed the above paragraph, with hardly a pause, four of them have gone off. They’re explosive, so their detonation several hundred feet up echoes off the cliffs and jars the ears of the most sanguine of people. Some, like the bombs dropped by Stuka dive-bombers in WW2, are equipped with whistles that shriek as they ascend to explode.

Last night, after well over a hundred, and maybe twice that, were let off during the day, I thought we’d reached nocturnal calm at 11:00, when I went to bed. Two salvoes just after midnight scotched that idea, and I needed another hour to settle back into sleep. Then, the first salvo of the day came this morning at 5:45. Victoria, one of the dogs I care for, spent most of the night cowering under my bed, while the others just seem stunned by it all.

My headline refers to a segment of the Western in Front in WWI that hardly shifted for three years, and which often underwent attacks and counter-attacks. Many men serving there came out haunted for life by the incessant bombardments. Yes, I know this is a series of explosions without physical injury, and it will be all over by Wednesday. But it grates on the nerves of many of us as well as frightening our pets.

I always try to switch off my murder fantasies by shifting them to a more practical dream. I know the rockets are stored in a building adjacent to the village church, and I’d love to take a 50-gallon drum of water there at 2.00 am, and soak all of them in it. It would upset the rocket launcher-in-chief no end, for I’m sure he loves the sense of power involved in sending the things up into the air over the village, knowing their boom will be heard far away. But if I was caught, the community would never forgive me, even if some other people must hate the noise. I therefore abstain for fear of discovery, but not because I feel it would be wrong.

The theory, I understand, is that firing rockets upward during religious ceremonies underlines the idea of pointing to Heaven above us. Why prayer, music and bells can’t do the job here as they do elsewhere in the world, I’ve no idea, but I do grasp that rockets are fun. When there’s a parade around the village, they’re let off every time the procession passes a shrine to the Virgin Mary that’s in someone’s front wall. There are a lot of such shrines, so there are a lot of rockets.

Fireworks are part of life in Mexico, as they are in many countries, but the affection is very pronounced here. I’ve always enjoyed them in a display, but not when they only produce loud bangs. Right now, sleep-deprived, and having spent time trying to reassure traumatised dogs, I’m simply hoping that by tomorrow, or at least the day after, the village runs out of ammunition. Last time I was here for the fiesta, somebody was firing off two a minute for a solid hour. That becomes unbearable.

I suppose I don’t really want to kill the launcher, or at least I do only when he’s just awakened me from sleep. But at times, I do hope he goes deaf. And that one day, the loud explosions are banned.

From the Ypres Salient, where all is not quiet on the Western Front, over and out.