The first time I did it (and the only time, actually) was outside Pape subway station in Toronto. He was about nineteen, and marching along determinedly, face glued to his smartphone, apparently watching a YouTube video. I’d been dodging people who were doing the zombie walk for months, and fed up with it, I braced myself, lowered my head, and waited for him to cannon into me.

He didn’t drop his phone, but he was really stunned to discover that someone else already occupied some space he thought naturally belonged to him. He muttered an apology after yelping, and I walked off without more than a disdainful look, and a slight sense of regret that being a grumpy old geezer wasn’t more fun.

What had triggered me was an encounter the previous Saturday, in the middle – the middle – of Spadina Avenue, at Queen. The girl just wandered out as other people did, not checking if the pedestrian light had actually changed, and bumped into me in the middle of the street. That is, in the middle of six lanes of traffic (including the streetcar tracks), on a busy afternoon. I did the reflexive Canadian thing, a formulaic “Sorry,” then as she wandered off, face re-attached to her cellphone, thought, “Heck no – I’m not remotely sorry.  You might be stupid, but do you actually want to remove yourself from the gene-pool?”

I have no idea if some Higher Power thought it might be an idea if she did; I don’t get a lot of clear communications from Higher Powers. But I did decide it was time to make some sort of statement at the combined stupidity and rudeness of people walking along the street without looking at who’s ahead. Hence the deliberate Pape subway collision.

I don’t think I effected any useful sociological change.

This was a couple of months before my return to Mexico last year. And I kept telling people, “Look, where I’ll be living the sidewalks have too many steps and things to trip over, and so many tripping points caused by earth movement, no-one can walk along looking at a cellphone. You’d be on your face on the ground inside five minutes.”

Mexicans are the most adaptable people. Sure, three or four years ago nobody could do the zombie walk down an uneven sidewalk. As a matter of fact, back then only wealthy people had smartphones. But cheaper models came onto the market, and people who had always lived with uneven sidewalks and rocky pathways adapted their new skills to the ones they’d learned in childhood. 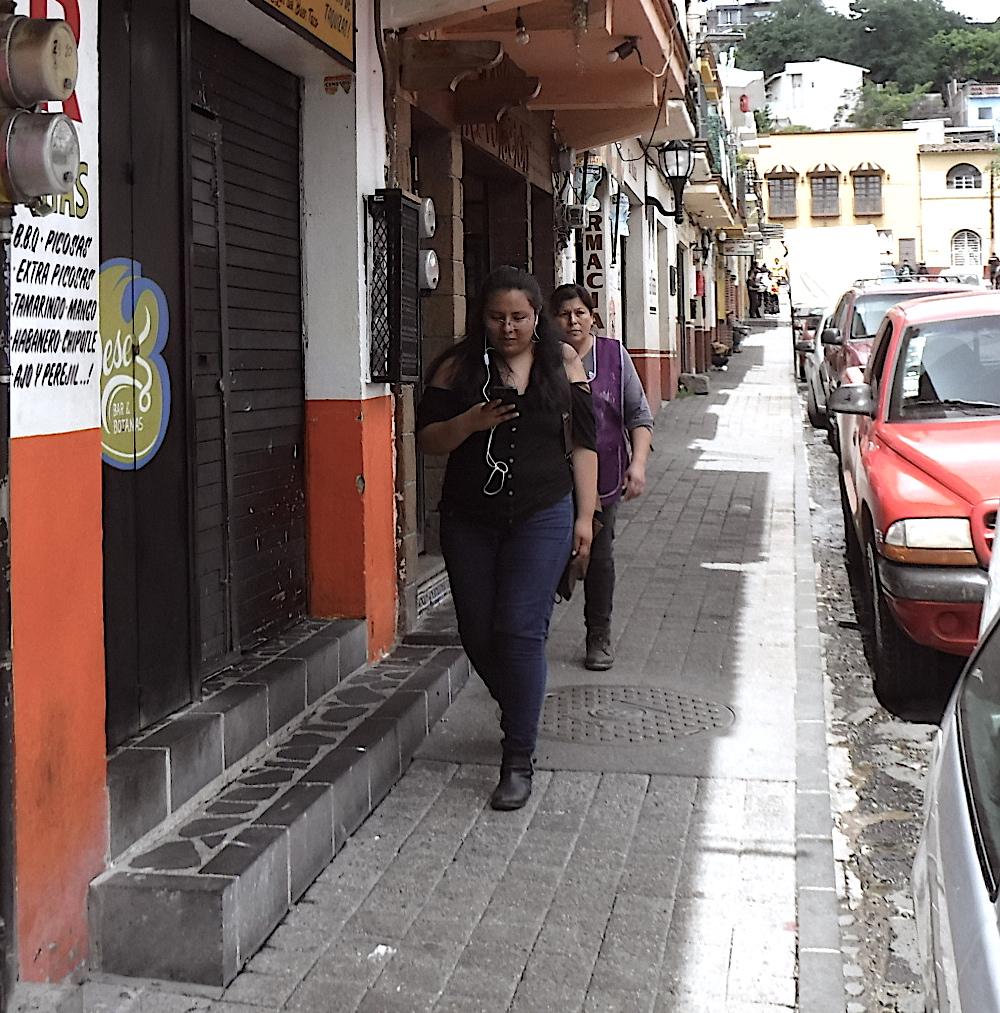 Born to walk on uneven ground.

Sigh. No phone-entranced pedestrians. It was a nice fantasy while it lasted.

Now, my pal A. – he says he threw away his cellphone into a ditch. He felt it was taking over too much of his life, he said, and did something about it. That, I feel, is a courageous move. Unless of course, he had tried zombie walking and fell flat on his face, and didn’t want to admit it.

I know I won’t try it. I nearly fall over something here once every other day, just admiring the scenery. If I tried zombie walking, I’d be down in thirty seconds. And if I deliberately block a Mexican who is doing it … the culture here is different. I might find I regret it.

One thought on “March of the Zombies”