Teotihuacan is one of the most visited archeological sites in Mexico: four-million people a year go there, and I’m happy to be one of them. Less than 90 minutes from downtown Mexico City, it has frequent bus connections, a huge size that accommodates large crowds (still, don’t go on a weekend) and some of the most impressive structures in the Americas.

Afternoon storm clouds gather behind the Pyramid of the Sun.

Nobody knows what the original inhabitants called it, nor what they called themselves.  The modern name is Nahuatl and is often translated as “Place where the gods (or, the Sun) were (was) born.” We don’t know the names of those gods or the rulers, though we do think there was a major goddess and also a rain god. They also built the earliest major temple to the Plumed Serpent, Quetzalcoatl. The city seems to be oriented towards the point of Equinoctial sunset, and there might have been a cult around the perceived motions of the planet Venus.

After that, it’s largely suppositions and guesswork. If you enjoy a mystery, Teotihuacan’s your place. 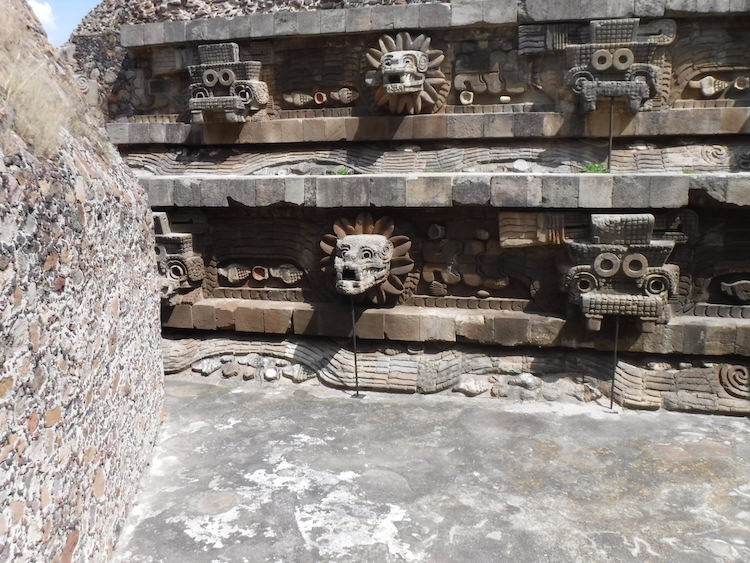 Original carved images of the Plumed Serpent at the temple of Quetzalcoatl, with what has been interpreted as a sacred headdress.

The city began some centuries before the Common Era as a small community. A popular theory is that the devastating eruption of the Xitle volcano south of Mexico City, made the residents of Cuicuilco head out, and that their skills in producing large earthen constructions (Cuicuilco still has a large elliptical ‘pyramid’ on its site today) fed into the scheme to build the big pyramid at Teotihuacan.

But most aspects of Teotihuacan’s story remain obscure. Anyone who visits today is struck not by lists of dates and kings (no writing has been found) by how harmonised it is with its physical situation, and how the main pyramids seem to echo the contours of the hills surrounding the city. Add in the celestial orientations, and you begin to sense that the city, even in its ruined state, is midway between heaven and earth, but well connected to both.

The site covers about eight square miles, and was home to 125,000 people, maybe more, who came from across what we now call Mexico; two thousand years ago, it was one of the half-dozen largest cities on earth. Today, that largest pyramid, named (possibly wrongly) the Pyramid of the Sun, is the dominant feature, and it’s hard not to be impressed by its massiveness. I don’t try – I’ve climbed it, climbed around it (where it’s permitted), and have gazed from the top of it a bunch of times. It still never exhausts my sense of wonder.

A courtyard in what was probably priests’ quarters near the Temple of the Moon. The red pigment is largely original, as are parts of the relief carvings of Quetzal birds and owls on the pillars.

Much of what we see today was restored by a man called Leopoldo Batres in the early 1900s. He was the dominant official in Mexican archeology in his day, explored scores of sites across Mexico, and messed up a couple of them with over-enthusiastic ‘restorations.’ His biggest blooper at Teotihuacan was trying to restore the five levels of the Pyramid of the Sun when in fact it only had four originally. I have to appreciate his enthusiasm and desire to celebrate Mexico’s past glories even if, like so many early archeologists, he didn’t know when to leave well alone. He lived large, and his story is one I’ll write about in another post.

The site is threatened by development, including the sight of electricity pylons marching across neighbouring farmland, as well as a WalMart built in one of its outlying areas a few years ago. At least the store was ordered to keep its signage modest and unilluminated.

Yet Teotihuacan survives all this. The millions of us visitors exert fresh wear and tear, but key parts of the site are kept sealed off, including (sadly) a recently discovered underground mountain landscape, with mercury for lakes and crystals, such as iron pyrites, to simulate a starry sky. The place is just too unsafe and fragile to admit tourists.

On any given day, you might notice one or more archeological groups working there: on one visit a few years ago, I found four of them, from different universities and organisations, all exploring different parts of the site, looking for clues, hints, secrets, tunnels, tombs … and anything that explains a little more of what produced the immense economic and political vitality of this city of mysteries.

And even if they find little to answer those questions, the peace and majesty of the site are still worth the visit. Not everyone responds to it that way – I have friends who find it oppressive – but I personally always feel refreshed and encouraged by a visit. It survived internal upheavals (religious structures were burned late in its original period), appropriation by Aztec emperors who were inspired to make an equally grand city in what is now Mexico City, wilful destruction by Spanish Conquistadors, and erosion by rain, earth tremors and the passage of time. And it is still a place that inspires superlatives.