Leopoldo Batres (1852-1926) isn’t well known outside of his native Mexico, and even there he’s little appreciated. This is a pity, because he did an enormous amount, both good and bad, to establish the image of his country’s history for today’s tourists. If you visit ruins in Mexico, the odds are good that Batres was one of the first to investigate them. 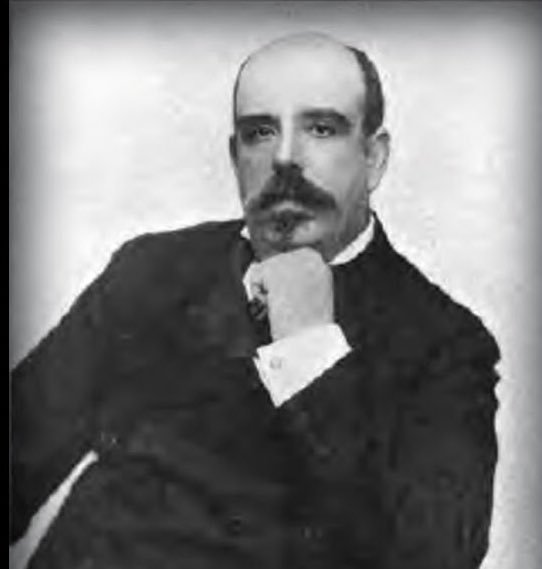 I first came across his name … well, all over the place: at Teotihuacan, which I wrote about in my last post; at Xochicalco, where he excavated major ruins on a splendid hillside location; at Chichen Itza in the Yucatan, and other places. It was as if some archeologist had been everywhere and chalked a “Kilroy was here” sign.

Trained for a time in France, he returned to cover tens of thousands of miles in his career, receiving a presidential appointment as Inspector of Monuments and going all round Mexico to find and bring back objects for the museum in Mexico City. In my town of Tepoztlan, then little more than a village, he got into a squabble with Francisco Rodriguez, a local engineer who had taken sculptures from the temple of Tepozteco above the town, and set up a small museum for them in the community.

The two men ended up in a shouting match on the main street about who had the right to them, the locals or Batres as the federal Inspector. Batres won, and to see them today you have to go to Mexico City. The small Museo Carlos Pellicer in town has only a few pieces, mostly copies of the originals.

Batres was a restorer as well as a gatherer of relics, and restoration of ancient sites is problematic. Different rulers alter features or build new ones, and in Mexico in particular, there’s often a process of accretion where extra layers are added, so an original structure becomes merely the core. The so-called Pyramid of the Sun at Teotihuacan was named by the Aztec emperors who went there to offer sacrifice, a half millennium and more after the original city’s decline. They made some alterations to the top of it by adding a temple (maybe, several there and round about), which the Spanish later demolished.

So, when a temple or pyramid is restored, the question is: to what period or state? Today, the answer is usually “Leave it as it is, with interpretive materials for visitors to read,” but it took misadventures such as Batres’ efforts at Teotihuacan to get us to that point.

Porfirio Diaz, president of Mexico, gave Batres the job of restoring the old city near Mexico City in 1905, a project that was to be ready for the centenary of independence in 1910. Batres had a big budget, top-level governmental support, and a will strong enough to carry it off. Some people still wish he’d lacked all of those. But he did have them, and set to his assignment with gusto.

Post-conquest chroniclers and artists almost uniformly depicted the Pyramid of the Sun, as the most visible part of the ruined site, in an odd way: they tried to make it look like an Egyptian pyramid, in style and proportions. But it’s nowhere near as steep-sided as the monuments of the Nile Valley, it doesn’t have a stone core, but simply piled up earth and rubble, and the casing stones are unlike the solid blocks we see at Gizeh or Saqqara. Further, it is subdivided into four steps or stages, a style that only the earliest Egyptian models used, and then in differing proportions. And the walls aren’t straight, as they seem from a distance, but convex. Yet so strong was the old idea that Mexico had copied the culture of Ancient Egypt, that people inevitably assumed this was the case. Pseudoarcheologists still push this idea, despite the vast amount of data today showing the contrary.

Early researchers in Mexico, therefore, were caught between demonstrating pride in how their historic cultures continued those of the Old World, and supporting the still-uncertain theory that Mexico did it all alone. There was also a desire, which emerged strongly later in the Twentieth Century, to give Mexicans a sense of pride in their pre-Christian heritage. It was thus a project of great nationalistic anxiety that the sprawling ruins close to Mexico City should be a site worthy of a visit for the country’s guests. Not least among the tacit aims was sticking it to snooty university scholars and other American visitors:

“New York? Yes, we’ve heard of it – but do take a look at what we did two thousand years ago!”

Enough of the site was left undisturbed for later, more conservative archeologists to dig up, that Batres’ bloopers weren’t catastrophic. But in his efforts he added an extra level to the Pyramid of the Sun, and damaged the structure when he removed more than the surface vegetation and superficial rubble, assuming the core would be solid: the summer rains that began to wash away original material disabused him of that idea.

The so-called Street of the Dead (Calzada de Muertos) has a few structures that he put together with inspired guesswork. He wasn’t necessarily wrong, and his work is at least consistent; but once a structure has been rebuilt, it becomes far harder to determine its original form. His vision therefore determines the way we see the ancient city today. More than any other site he touched, Teotihuacan today bears the stamp of Batres’ presence. 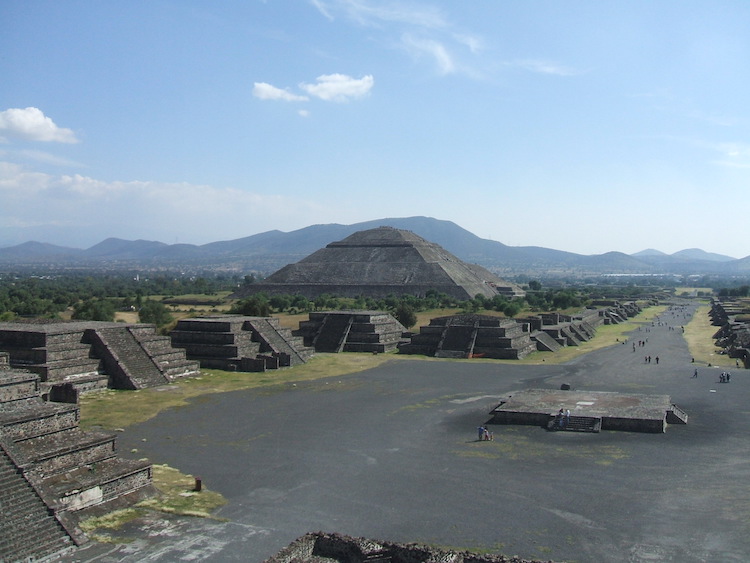 The Pyramid of the Sun at Teotihuacan, with other structures that Batres restored on the central plaza and down the Calzada de Muertos, seen from the Pyramid of the Moon at the western end of the site.

All strong-willed men make enemies, and Batres made more than his share. Diaz fell from power in 1911, and went to exile in Paris, where I serendipitously came across his relatively modest tomb this past April. Following Diaz’ exit, Batres lost his position to, of all men, the same Francisco Rodriguez with whom he’d argued on the street in Tepoztlan years earlier. He spent the next dozen years till his death defending his reputation. His roughshod methods and sketchy scholarship meant he was banished to the dustier attics of archeological memory, while better trained and scientific researchers took over, finally establishing the supervisory bodies Mexico’s heritage has today. 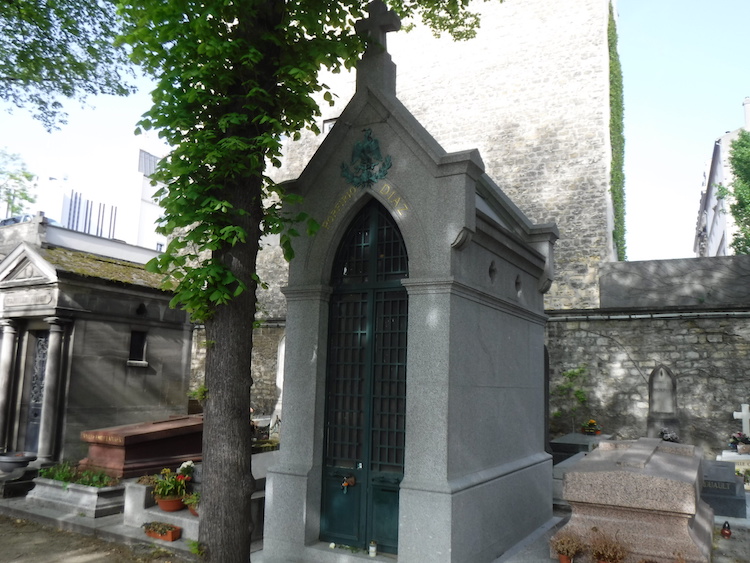 Not quite Teotihuacano in style – the austere tomb of Porfirio Diaz in Paris’s Montparnasse cemetery.

But while his Indiana-Jones-with-a-certificate approach was crude, I’ve also come to appreciate that he helped not just to recreate monuments, but left us a particular window for understanding Mexico’s own past. Teotihuacan as it is today is a special part of that legacy. The mixed feelings I get standing below the Pyramid of the Sun, with its one-too-many decks, force me to accept that he has his own place there, beside the original builders and the Aztec revisionists who came centuries later.

Some years ago, I wandered round one of those decks running round the pyramid, a place where tourists scrambling for the summit usually don’t go. On the north face, I found an odd little brass pulley and some other metal parts set into the cemented stonework, and wondered why they were there. After a few minutes, I realised these were relics from Batres’ reconstruction, left in place at the conclusion of work. As he’s described in Prof. Christina Bueno’s excellent book The Pursuit of Ruins , which supplied facts for this piece, we know Batres was a very hands-on manager. He doubtless intended to take them out, but the loss of his position made that impossible, and perhaps no longer important.

While other people have favourite spots on the site that they visit in reverence or enthusiasm, I like to seek the slowly corroding remnants of that device, and recall who put it there, and why. 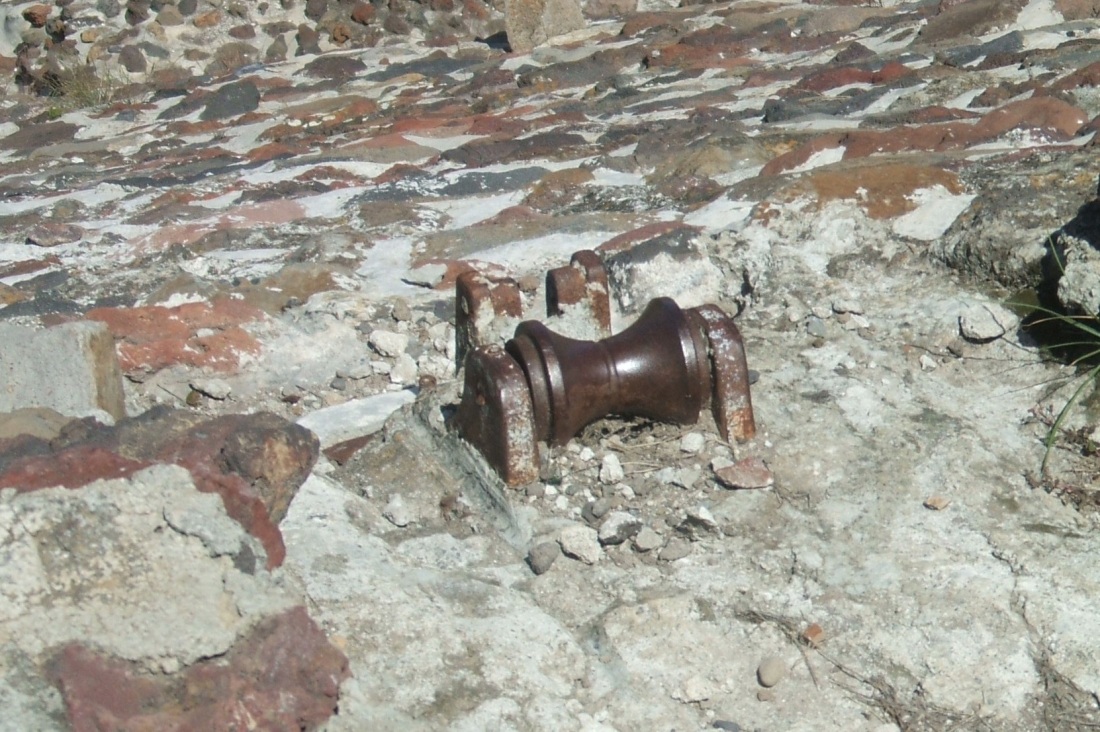 The brass pulley, set into cement on a sloping flank of the Pyramid of the Sun.

The original builders must have had similar devices, though without brass components. The brass pieces link us back to the enthusiastic official of a hundred years ago and, by implication, to the unknown workmen who toiled in the same place two millennia before. The ability to interpret this artefact for myself explains my affection for it, along with the sense of connection I get from it to the man who did what he could to bring The Place Where the Gods Were Born back to life. It’s an object that, because it’s overlooked, retains a simple but specific connection to someone who lived large and proud, and opened the past for us to admire today.

One thought on “The Rebuilder”