A hat is an essential thing in Mexico, particularly for someone who’s two-thirds bald. Me, for instance. I never set out to town without one on my head. I’m in the tropics, so for much of each day, the sun is virtually right above. It’s not such a problem around this time of year, but it still isn’t a good idea to expose pale skin to direct, overhead sunlight every day.

The hat I bought last December was an 80-peso cheapie. Friends told me it made me look like an Amish farmer, then said they liked the look on me. I still don’t know what I should have made of those remarks.

Regardless, a sombrero is an essential friend under the tropical sun.

A stock photo of two random guys in hats totally unlike mine.

Now, if you’re going to a major city, wearing a straw sombrero is déclassé. It’s like you’re … well, some Amish farmer on an outing, gawking at the urban scene. That’s the one time I don’t take one with me. But before I made a visit to Mexico City last week, I went for a walk around the village, and then forgot to leave the hat at home when I left to catch a micro-bus into town. I realised when I was buying my ticket for the main bus to the city that I had my old friend on top of my head.

For some weeks, it had been looking sad. The woven straw was beginning to fray, and the coloured band around the crown had stretched and twisted. I’d been thinking of getting a new one, and while having a snack after reaching the city, decided on a sneaky strategy. I left it on a chair next to me.

I hadn’t, you understand, thrown it out, or discarded it, exactly. No, this was purposeful recycling. Someone needy could find the hat, and use it for his own needs.

It seems silly to say it, but I felt I’d let down a friend. I tried reasoning with myself – “You’re looking at this like you just abandoned a puppy on the roadside. It’s an inert object, for heaven’s sake. There’s a lot of poor workers round here, and someone will take it and use it.”

It didn’t work. That hat had been too much part of my style (such as it is), my presence, since I came back to Mexico a year ago. I had a case of the guilts all day.

Naturally, I bought a new hat on Wednesday. This one was 200 pesos, not 80, its label says it was made in Mexico, and it’s better finished. Unlike its predecessor, it even has a brand name: Tonpsom. A name, obviously, derived from respect for English elegance in earlier times. Finally, I might be becoming a fashion plate in my golden years. 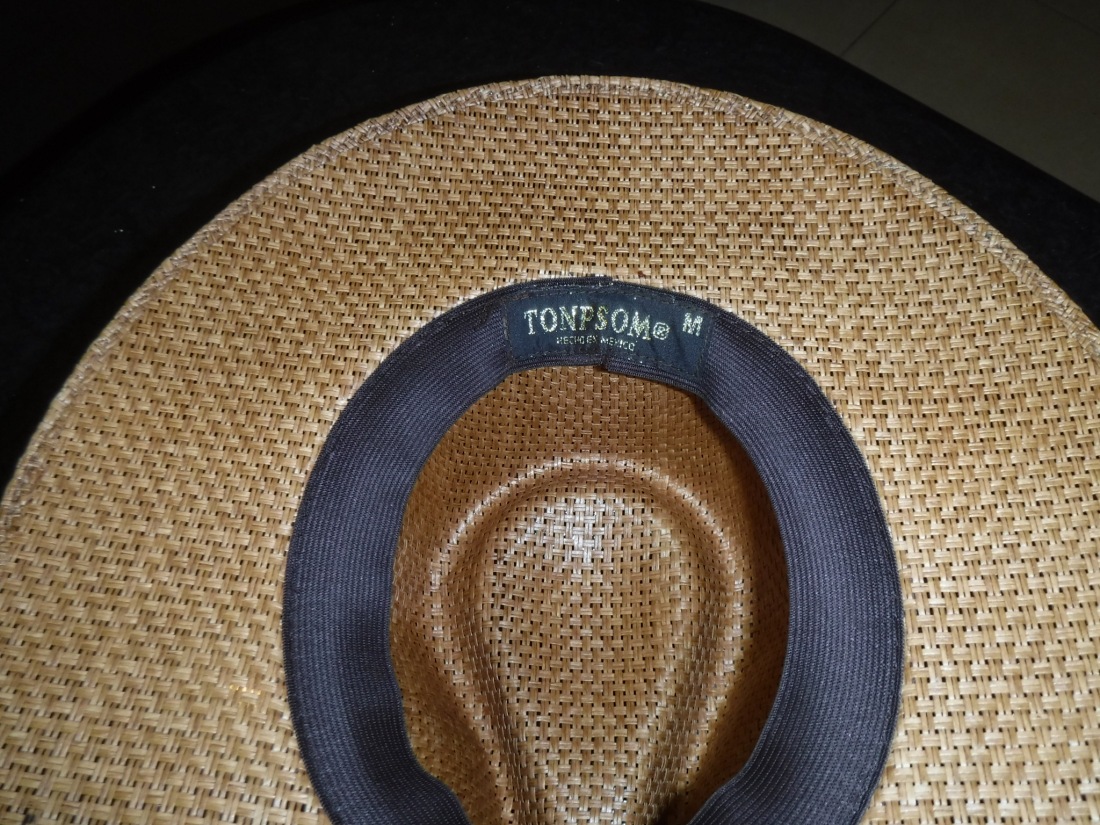 My fine new hat from the Tonpsom company.

So why do I still have the stupid guilts over the abandoned straw hat? I hope you’re doing okay, sombrerito. Wherever you are, or whoever’s head you’re on.