On my lane – it’s narrow, and a dead end, not an actual street – someone constructed a new house earlier this year. Initially, I thought the downstairs was a garage, but soon I could see it was too small for a regular car. Finally, the neighbour told me it would be an abarrotes.

When I came across this word abarrotes, I couldn’t at first make sense of it. It comes from a verb meaning “to pack,” but in the vernacular it simply means “groceries.” In some communities people use the word miscelanea instead, which carries the connotation of a general store, but in Amatlan and other places nearby, abarrotes is the preferred term. The word can refer to anything from a small space selling bottled water, canned beans and packets of snackfood to a slightly larger enterprise offering vegetables, milk, packaged cold cuts and cleaning supplies. But, a supermarket it’s not. 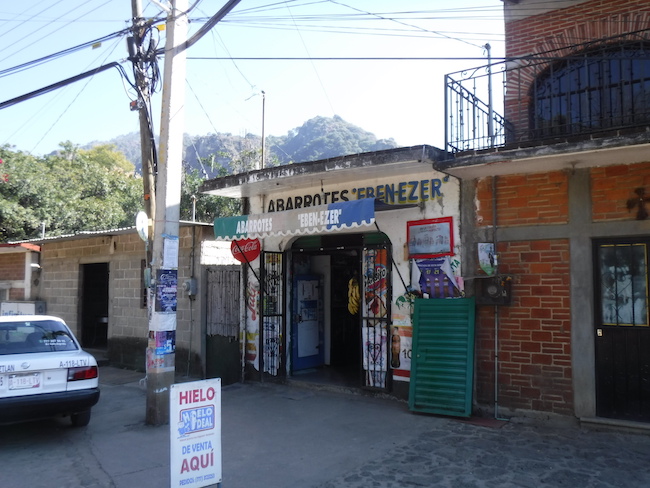 Abarrotes Eben-Ezer: a supermarket it’s not. The sign on the ground in front advertises ice (hielo).

The village’s economy made little sense to me in the early days, since it seemed as if a community of just a thousand people couldn’t support more than three or four little grocery outlets. And there were six or seven abarrotes. Now, we have nine functioning stores in and around the village, plus a couple that open at odd times – and that’s not counting the one the neighbour is readying.

The attraction, of course, is the low cost of entry. Retail’s a lousy way to earn a living, but if you have a house with street frontage, it isn’t hard to convert part of it to a small shop. Around here, every second male over twenty has worked in construction, so help in the conversion is available within the family circle. The initial batch of stock can be modest, and in time can be expanded to include cigarettes, beer or tequila, and whatever you notice that no-one else is offering in the immediate vicinity. The biggest place in the village, for example, does a solid trade in sacks of dry dogfood, there being a couple of hundred dogs here.

Abarrotes Sara wasn’t doing much business when I took this shot.

The cliche of small business in Mexico is the taco stand. That, too, doesn’t cost much to open, but it’s labour-intensive. You need to prepare each meal, as well as chop up a lot of ingredients before starting for the day. Then, there’s only business around meal-times. You also have to allow for wastage on slow days. Two or three times, people have tried launching actual restaurants here, but each time they’ve failed.

This store just has a banner on the front. Its sideline is selling tortillas by the dozen (“por docena”). Mexicans love their soda pop and snack-foods, and have a high rate of diabetes as a result.

Another option is the hairdressing salon, which often offers manicures or other beauty care. Again, the cost of entry is slight (you don’t really need a revolving barber chair), the main expense being the necessary training to cut and style hair. And since a lot of women learn to do this for people in their families, that skill-set isn’t hard to acquire.

With a tiny grocery store, though, you can leave your twelve-year-old in charge while you feed the baby or cook the family meal, and of course hs or her labour comes free. The business can expand with time, or – this seems to be the most popular option – remain a sideline. Doña Sofia, just opposite the church, opens her place at unpredictable hours, and perhaps only sees two dozen customers a day. She sells canned goods, water, soda-pop, fresh eggs, candies and knick-knacks, and spends much of the day in front of her TV in the living room behind the store.

She’s elderly now, and if she hears me enter, takes a couple of minutes to come to the front. But her place is the closest to my house, and that’s an advantage for carrying bottled water, though Sofia doesn’t stock the most reliable brand. I could get water delivered, but then I’d lose a point of connection with the community. I decided some years ago that keeping the old ladies on my side was sound neighbourhood politics.

But other than the two or three largest places, it’s obvious an abarrotes here doesn’t produce much of a revenue stream. The aim in Mexico, so often, is to multiply the ways your family generates income. Possibly the father works in construction or farming, the eldest kids work in the market in town or, if they’re a little educated, in municipal government office or a bank, and the mother runs the store. All put together, these are enough to support a family. It’s not an easy life, but the children learn responsibility at an early age – and everyone eats.

At the same time, the abarrotes concept often seems to be one of those hopeful things that doesn’t necessarily play out well. I usually buy a preferred brand of drinking water from a store that has a steady stream of customers. I rarely go into other places, like Doña Sofia’s, that don’t. Skulking round today photographing different places, I found three that I thought were still in business, but weren’t. 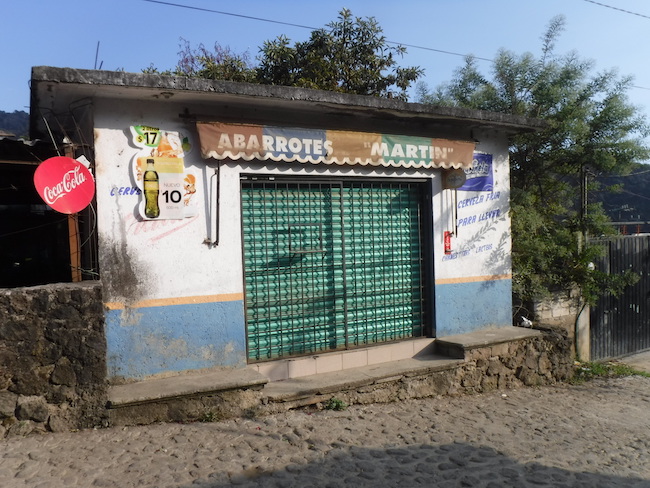 Abarrotes Martin closed some time in the past year.

Sometimes, the effort to maintain a small sideline isn’t worth the time or the electricity bill for the cooler for the soda pop. And sometimes, even a modest dream can be too hard to pull off. After all, that pop and the chips might be popular, but people are learning they’re prime contributors to the nationwide surge in diabetes.

That little place my neighbour is building? The house looks fine for a small family, but there are only seven houses fronting onto our lane. To reach it from the street, you have to walk up a short but disconcertingly steep incline.

Somehow, I don’t see it taking off. So, maybe his plan B should be to buy an extremely small car; he has a pre-built garage, after all.

Update, December 30, 2019: Two people have told me you get a government subsidy here for opening a small business. So, this is a factor in why people like to start an abarrotes.