Back in the summer, I wrote about the dog Oliver, whom I’ve cared for since I returned to Mexico just over a year ago. Ollie was always very thin, but a few weeks before Christmas, he seemed thinner than usual. His ribs stuck out, his waist was smaller, and there was little muscle on him. I tried changing his food, and giving him some anti-parasite meds, but his condition didn’t improve. This past Tuesday, since he was terrified of being taken to strange places like veterinarians’ offices, we called the vet in to look at him. The verdict, derived from blood and urine tests, plus a physical exam, was that he had no infections, but his kidneys seemed to be under stress, and probably there were other things wrong with him that needed further examinations. My neighbour Gabriel, who has bred show dogs, was a source of informed opinions, but he’s also an anxious man, and I was careful about accepting all his views.

Oliver was about thirteen years of age, which is very old for a large dog, especially one who’d been very sickly as a young animal. I’d realised he probably wouldn’t last the year, and began making an extra fuss of him at mealtimes, usually the only point in the day when he was okay about receiving attention.

Friday, I was in town till the afternoon, and didn’t look for Ollie in the corral until dinnertime, around six. When I called him four or five times and he didn’t come, I looked more carefully, and I soon saw him.

My guess is that he’d died around midday, since rigor mortis had now set in. It might have been a stroke or a heart attack, or … we don’t really know. His body had been lying in the sun for some hours, and was beginning to swell. We could have called the vet to take his body and “dispose” of it, but that wasn’t what was going to happen. His former kennel-mate Kato is buried under the trees above the house, and Ollie deserved to lie there near him. So, Gabriel and I wrapped him in a couple of scotch-taped garbage bags to keep off the insects overnight, and put him into our large dog-bath with a further cloth covering. The sun was just going down, so we resolved to dig a grave in the morning.

It’s hard to describe the terrain here, because we’re on a steep slope. You climb stairs to get to the main back door, and the back wall of the property is thirty feet or more above the level of the back patio. Long ago, this was a cow pasture, but the municipality asked us to build a wall, and without grazing animals it’s become overgrown. After breakfast, I looked to find an appropriate flat area, and, using a rather small shovel the house’s owners keep here, dig out a place for Oliver. My feeling was he’d have appreciated a site with a view overlooking the corral where he lived, so I selected a flat patch and began shifting dirt.

The soil here, known as tepetate, is a mix of clays and reddish volcanic dust. It’s very fertile, and for building, it has the merit that it doesn’t loosen much with earth tremors. It can absorb the energy of quite major quakes. However, it’s extremely hard, and has a lot of large stones and rocks. Before I began, I figured it would take me at least two hours to dig out a hole big enough for large dog, and since it was going to get really hot by midday, I set to it just before nine.

Nearly three inches down into the hard tepetate. Yes, exactly.

I did well. After forty-five dehydrating minutes, I’d gotten down nearly three inches through the hard earth. With Gabriel’s help, I figured, and knowing our energy would sag the longer we worked, we might get a grave dug by sunset. That is, provided the small injuries I’d sustained hacking into the earth didn’t accumulate to become major ones.

Gabriel took his turn, and soon declared we needed a pickaxe to break up the hard-packed earth. I suggested we buy one from the large new hardware store on the edge of town, but before we got very far from the house, it occurred to him to ask the guy building a house in our laneway if we had one we could borrow. The man, Valentin, did, and was happy to get his teenage son to fetch it and lend it to us for an hour or so. We tried working with it, and concluded we might even finish by mid-afternoon. Ollie, in the heat of the central Mexican day, would by then be … deteriorating, shall we say. 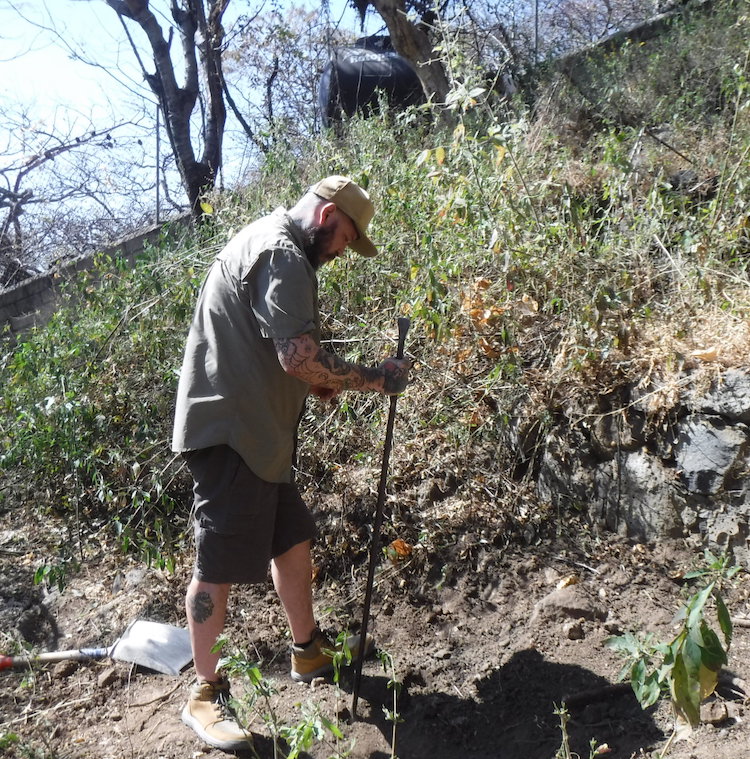 Gabriel trying his hand and breaking the earth. The tinaco, the water-tank, is visible above-right.

“Let’s just ask those guys if they want to earn some cash,” Gabriel suggested, an idea I’d already contemplated, though I wasn’t sure how to approach them. So we went back, and Gabriel negotiated a decent offer, and the two of them took us up on it. Valentin’s son is only fourteen, but he’s built like a football player, with bulging muscles and a strong back.  I was impressed by both of them as they attacked the tepetate. Mexicans’ ability to take the physical punishment of hard labout always astonishes me.

Sixty pounds of rocks in a bucket? All in a morning’s work for Valentin.

Sure enough, in twenty minutes, they were down six or seven inches. But they’d hit a problem: rock. How much, how big? We couldn’t determine: you can’t when you’re digging downwards. But it was big enough. We could have asked them to dig elsewhere but the problem was, the conditions are the same all over the sloping wilderness that, once, we planned to turn into a hillside garden. Maybe, as happened with Kato’s grave six years ago, we’d hit a patch that was clear of large rocks down far enough. And maybe we’d try five locations and they’d all have boulders a few inches under the surface.

Valentin proposed the solution. Next to the rock platform with the tinaco, the water-tank we fill to have a gravity-feed of running water, there was a space with the property’s wall to one side. Why not bury Ollie just there, under the rocks and earth we’d already dug up?

General construction workers here always have a stash of everything they might need, and he had a little cal, or lime, that would prevent the occupant developing rich aromas and becoming a magnet for rats. We could pile the earth we’d already excavated, then some of the rocks, on top. Architecturally, it wouldn’t win prizes, but it would do the job.

I’m being matter-of-fact, almost flippant here, but all the while we had to deal with the fact we’d lost a friend. Gabriel was more dismayed than me, since he’d assumed Ollie might be cured of his current ailment and enjoy another year or so of life. I was – am – upset, having worked to make that scared animal feel secure and loved, but as I said, I also felt his time was very close. Having pets requires, at a certain point, a readiness to let them go, especially when they hit their dotage. Two others here – Ollie’s half-sister Victoria, and the little poodle-cross Punky, who’s now blind – are similarly in their last years, and I watch them for signs of decline. Ollie left us faster than I expected, but I was half prepared for his departure.

So, around 1.00 pm, with the dog’s remains placed in the grave and the lime, earth and some rocks placed over him, the job was done. Right next to his little tomb is the rock platform with the tinaco on it, and I can imagine his spirit standing on that, looking down over the corral and out into the field where the cows and horses wander to graze.

Inelegant, perhaps, but secure, and with a nice view from the adjoining rock platform.

Faced with the actuality of anyone’s existence ending, we all conceive of different fates for those we’ve lost, and my idea here is that he’s looking down at Rem, our much younger Labrador-cross who’d try to steal his food, and thinking: “Dude, I’m above you now.”

Gabriel had a different thought.

“Did you leave his collar on him?” he asked me, and I replied that I had.

“That’s good, he has something to pay the boatman on his way to the afterworld.”

It was a mix of Greek and Mexican traditions, but I like the imagery.