I’ve been reading alarmed reports recently about repeated eruptions from Popocatepetl, with some people interpreting them as signs of an imminent seismic apocalypse. But in reality, Don Goyo, Mexico’s most famous volcano, lets off steam and a bunch of ash the same way that Toronto gets snow in winter: regularly and frequently, if slightly unpredictably.

It’s really neat to see a plume of smoke and ash rising from the cone, at least from the safe distance of 25 miles or so that lies between my village and the summit. The volcano is most beautiful after rain, however, which tends to fall at those heights as snow, and coats its enormous bulk in white.

I guessed this to be the case when I first came here, since there were so many strata visible in the rockfaces. Volcanic activity here has come and gone over millions of years, changing the topography. At intervals, more sedimentary rocks have been laid down between the periods of volcanism.

Some seven or eight years ago, I was walking on a hillside trail when I spotted a large, patterned rock, just as I was close to finishing the house I was building. It was a chunk of fossilised coral, knocked out of a rockface by some unnoticed tremor, that with the rains of many years had eventually arrived where I was standing looking at it. It was a perfect ornament to go beside my outside stairs.

Years ago, when my kids were small, I would take them to a stream in Erin Mills, the part of Mississauga in Ontario where we lived, to find fossils of seashells. They had washed out from soft, sedimentary rock upstream, and they made neat talking-points on a bookshelf. I think, though, I was more interested in them than my kids, who just saw greyish-green stones with streaks on them, while I saw very ancient history. Anyway, for me finding the coral was an extension of that old pastime.

Now, getting the coral home wasn’t the same as fetching back a clamshell fossil that fit in my hand. This thing weighed 30 lb, and I had to lug it half a mile home. But, I felt, in doing this I was earning the ownership of it. And I’ve never seen a specimen as large or fine here since.

A couple of years passed, and I came back to Toronto to earn more money for my retirement. One time, I asked Ofelia, the woman who rented my house what had happened to my fossil, but she had no idea. I guessed it had been discarded as just another lump of rock.

More time passed, and I returned here. Ofelia had died, and someone else had taken it. He didn’t know about any fossil, either. But then one day, soon after I’d come back, there was a discussion about the security of the corral where our dogs spend their daytime hours.

“Well, just use the big rock to hold the gate shut,” said my friend Lucero.

“Which rock?” I asked, not thinking clearly, so she showed me.

It had been used for this purpose for some months, and much of the coral pattern had been worn away. What had been living creatures millions of years ago, and had taken many more to impress itself as a fossil in limestone, was largely erased for ever.

There was, obviously, a lesson in the philosophical concept of impermanence here. There was also an opportunity for me to extract some emotional leverage for the damage done to something irreplaceable. But I knew there must be more pieces of such petrified coral in existence, and this specimen was not unique. So, I opted for half-baked Buddhism, while privately lamenting the ancient pattern’s erasure. And since it was too late to prevent the harm, and it was – after all – a rock, I let the topic go.

But I do look at the rock from time to time, and gaze at the coral pattern still etched along the un-abraded edges. It’s a simple reminder of how easily the earth can display its immense age when it isn’t covered by concrete or asphalt. 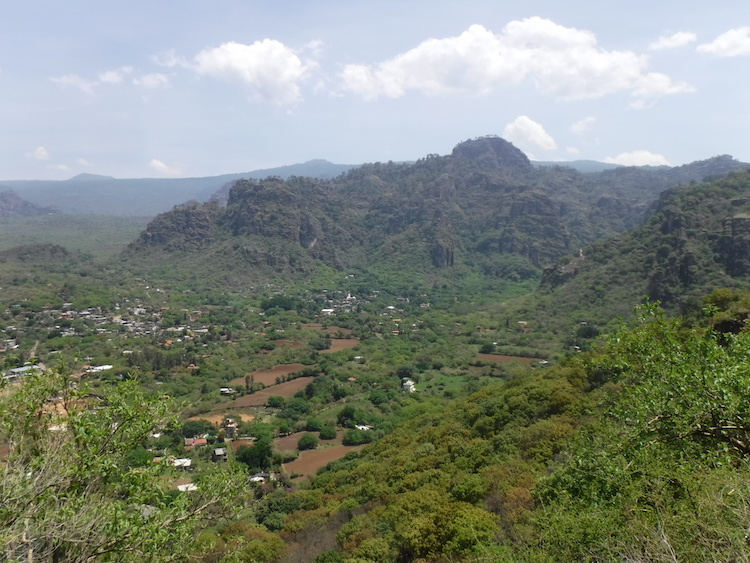 Amatlan de Quetzalcoatl seen from a hillside above the village. Once, the ocean covered this place.

In such a mood, I took the photo at the top on our patio one afternoon a couple of weeks ago. I stepped back, admiring my worn find. I was soon joined by Punky, one of the three surviving dogs here. Examining the object of my attention, he commenced his own palaeontological enquiries, sniffing it from all possible angles. Did he, perhaps, detect some faint hint of saltwater impressed into the rock aeons ago? Or even grasp, from a lingering aroma of compressed lime and clay, how it had lain within the rock of the hillsides of so long?

I’ve no idea. For he then did what any sensible dog would do faced with the presence of immense history, and lifted his hind leg, anointing the damaged fossil with a pungent scent of his own.

I’m very fond of Punky, but I fear he just doesn’t have that much scientific curiosity.

Punky rolling around on the patio.