You can tell a mountain is a mountain, because it’s big, and high, and probably involves exposed rock. But when you spend time on a mountain, unless you’re really up high on a barren or icy area, you’re on ground. There’s probably grass plus some small plants, and many mountains, like those around my home, have lots of trees on them. In short, they tend to be just like regular countryside, only steeper. They’re less mountainy, the more mountain-sided I am as an observer.

My ambiguity about mountains stems partly from living right under one: familiarity breeds maybe not contempt, but a certain boredom. About sixty yards back of my house, there’s a cliff that rises and recedes in stages for several hundred feet. To the right, or north, there’s a jagged area of exposed rock where a bunch of the stuff came down a long time ago. I often wonder if there’s more of it waiting for a good quake in order to come down on the house, but no-one here remembers it falling in their lifetime.

Mountains near my home. The ridge at the rear is to the north, and rises almost a thousand feet above our village.

But my favourite view from here isn’t of the bluffs curving round to the north and across the east, with the little valley that clefts them. Nor is it the more dramatic bluffs a few hundred yards to the east, which screen the rising Sun from the village, and ascend as much as 700 ft from the village streets, which are already at 4500 ft above sea level. Rather, it’s the view to the south, where the hills and mountains are five or six miles away, or further.

The view from my home down to the hills around Yautepec, a short time before sunset.

There, they recede in a blue haze of uncertain detail, which means they can imply almost anything: wildness, inaccessible heights, or concealed caves with giants, heroes or dragons. I don’t mean that I believe in such things, having seen no dragons nor giants, and encountered few real heroes in this part of Mexico. But the effect of seeing them calls on such ideas from deep within.

It’s this ilusion of mountains that began to fascinate me after a year or so. They are, I decided, much more interesting as ideas than as concrete realities, which means they’re much more appealing from a mile or two away. And seen from a dozen times that distance, they conjure up all kinds of fantasies and mythic whisperings.

On a day when it has no snow, but is giving off a faint halo of steam from the summit, the cone of Popocateteptl rises over a low point in the hills east of my village.

My point is that we’re programmed for mountains to inspire us. Up close, as I said, they’re just a lot of raised ground, often hard to ascend comfortably. The best they can offer (which can be very good indeed) is a vie down across lowlands towards other mountains.

This morning, wanting to go somewhere I’d not been recently, I headed to the town of Yautepec, a few miles south of here. It nestles in those hazy blue southern hills I mentioned above, with three or four lines of mountainous slopes marching off in the distance beyond it.

Looking for a long-lost restaurant, I began climbing a street running up a hillside, and kept going as a view to the east opened up. Between my village’s mountains and the hills of Yautepec, there’s a flat area that runs for a considerable distance eastwards, and sometimes you can see the volcano in that direction. And today, the top 5,000 ft. of the active Popocatepetl and its extinct neighbour, Ixtaccihautl, were both snow-covered, while the air was as clear as it can get in the 21st Century. Coming to the summit of the hillside street, I had an unobstructed view of both these mountains over someone’s roof, and spent twenty minutes absorbing the beauty of the vista, while lamenting that I didn’t have anything with me to take a photo. 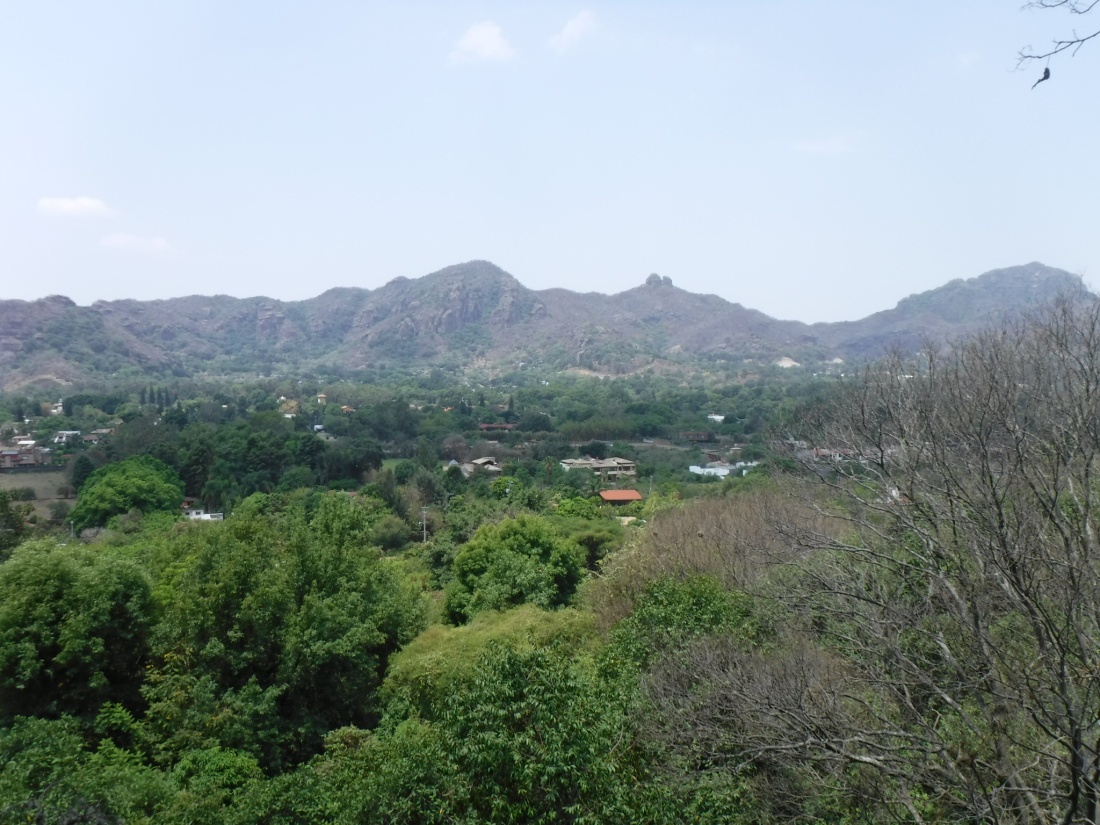 This range of hills, south of my village and closer to the town of Tepoztlan, have their own air of mystery.  There are trails up there, but you need a guide to find them.

The full range they form is around twenty miles long, and I don’t think I’d ever seen the pair as clearly as this before. I’ve been to their foot, at Amecameca, which is still, I believe, a starting point for people climbing Ixtaccihuatl. Popocatepetl, of course, is off limits to climbers, since even if some people don’t fear scorching hot ash descending on them, the rescue teams don’t want to risk getting killed themselves, recovering asphyxiated bodies.

Eventually, I came back down the street, and took the bus back home. Coming up from the plain, I admired the smaller mountains directly ahead of me. They looked suitably steep, green and dramatic, and very attractive, more so than up close – a perspective I know well, since I live amid them. Eventually the bus, which was old, lumbered and shuddered up the road into this scenery, and the drama faded away. Once again, I was in simple rising ground, slopes punctuated by trees and rocky outcroppings … but not ‘mountains.’

I’m glad Popocatepetl is off-limits, and I can never go on it. That means it will retain its mystique. It will stay a mountain.