Walking in the hills around my village, I’m always finding farmer’s fields in unexpected places. Land passes down through the generations, and people continue to use it for growing corn, avocados and nopales (cactus), or as cattle or horse pasture, even if it’s on a hillside that’s difficult to access.

This past Sunday, three friends and I made the hike from this village of Amatlan to Ocotitlan, which is seven to eight kilometres away over a rough uphill trail. In Nahuatl, the ‘tlan‘ suffix means, basically, ‘place’ or ‘place of,’ so that Amatlan is the place of the Amate trees, and Ocotitlan the place of the Ocotes, conifers whose resin-rich wood is used to light fires.

It was an exhausting hike, but a rewarding one. There’s lava from long-extinct volcanoes lining the trail most of the way, so you need to make sure you don’t stumble. And much of the walk involved passing between fields bounded by walls made of stacked hunks of such lava.

Usually, trying to avoid tripping or stumbling, I don’t notice the walls much, especially since they’re everywhere round here. But at one point I realised we’d walked past one wall that was hundreds of yards long, and that building it must have been a huge job. Some of the rocks might be the size of an average brick, while others have the dimensions of an outsize beach ball. So, their weight varies from a few pounds to a couple of hundred. These big ones can only be dug up and rolled into place, not lifted, and it would take two or three men to stack one on top of another.

Land here is religion – so goes a common saying. If it’s not demarcated clearly, then it’s not hard for a violent dispute to start. However, if there’s a wall of stacked rocks that’s been there since your grandfather’s day, then it’s as good, or even better than, a notarised land deed. They’re also a haven for wildlife like lizards and rodents. These things don’t spring up overnight, but take time to construct, and they take on an almost sanctified character with the passing years. 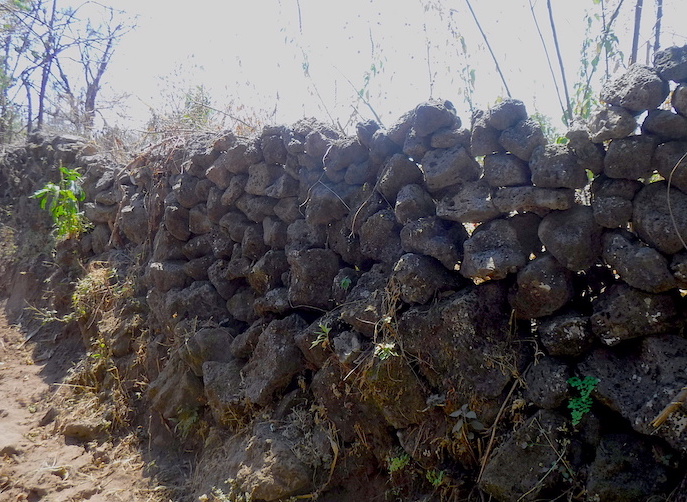 A portion of a lava rock wall, hundreds of yards long.

Sunday was hot and sunny, and it hit 29 degrees C by noon. We were watching our water as we hiked, and making jokes about how much we’d charge each other when someone’s bottle was empty. You can’t work up there in the heat without water, and the springs are often dry between the year’s end and the start of the rains in June. So, simply to stack boulders, you need to bring water with you.

At that point, as if on cue, a man with a burro showed up, on his way to water his new avocado plants. The animal carried a couple of water bottles filled from a spring that hadn’t failed yet, and the man was happy to see someone else and to give us advice on how to stay on track. I assume, but didn’t think to ask, that he, too, has rock walls to maintain, and must lift them back up when they fall after a quake, or simply from the passage of time.

Some farmers have opted for barbed wire in recent years, which is far easier to install and maintain. But there are advantages from using the rocks, not least because nobody can move a rock wall easily. Their documentary testimony is hard to impeach, while a barbed wire fence can be put up in an afternoon.

It’s hard to use the word ‘technology’ in relation to farming, but farmers need to know and learn a tremendous amount about how to manage their land. Most of us never begin to consider that, any more than I often think about the labour that goes into a rock wall. Conglomerates have taken over some of the low-lying or flatter farmland, but up in the hills, it’s all still a business of scattered smallholdings and generational pride.

I’m assuming many of the walls – there are miles of them in total around here – are put up by families, not someone making a solo effort. The work must be dangerous: to drop a heavy rock, or have it topple after it’s positioned, can easily be a bone-breaking event. Up on the trails, I’m conscious that a twisted ankle or a sprained knee would mean a painful hobble to get help, but having 120 pounds of lava fall on my foot would be a whole other problem.

So, I tip my straw hat to the guys who can construct and maintain these things. The walls are often a guide to the route I need to take, and they also indicate the long, long heritage of land cultivation around here.