The conversation around the table had been going well, with my creaky Spanish enabling me to hold forth at moderate length. The five women who’d stayed as other people drifted home were gracious and witty. Oddly, since technical terms and longer words often are very similar in English and Spanish, it can sometimes be easier to discuss economics or microbiology with people here than it can be to discuss a new bus route or a recipe for cooked chicken, and we were speaking of the economic future at this point.

From there, we got onto NAFTA and its successor, the USMCA. One factor that differentiated Canada and Mexico, I suggested, was that Upper and Lower Canada, with help from Britain and the Duke of Wellington, won their war with the U.S. (that of 1812-14) while Mexico was beaten in its war (1846-48). It gave up 55 per cent of its territory as a result: more than 800,000 square miles comprising California, New Mexico, Arizona, most of Utah and Colorado, and bits of Kansas and Wyoming.

However, history, I promptly discovered, is national property, and citizens of any nation have the right to interpret it as they believe it to be. Mexico, I was angrily informed, hadn’t lost. No, not at all. One does not dispute historical fact with certain people in certain places.

I’m familiar with this attitude. As a child in England, I was taught how wonderful our Empire had been, and what glorious victories we’d won. I never heard about how the Dutch attacked and burned Chatham dockyard in 1667, capturing the Royal Navy’s flagship, or the various slaughters imposed during our rule of India. And in the 1950s and 1960s, when I was in school, nobody was mentioning how prior to WW2, many public figures, especially in the Conservative Party, had been tacitly or overtly pro-Hitler. But there were plenty, as you might recall in the fictionalised but realistic presentation in from The Remains of the Day  (Try 5.30 – 6.30 in this clip).

Americans know how in recent decades their defeat and withdrawal from Vietnam has not necessarily been described as the loss it was. And Germans might recall how the blunders their High Command made in 1918, which led directly to collapse of their Western Front and the end of WW1, were attributed to socialists, malcontents and, of course, Jews, back in Germany. General Ludendorff, who made the worst of those blunders, wrote a book about this to ensure the blame didn’t fall on him.

So, I shouldn’t have been wholly surprised to learn that Mexico didn’t lose its war. But for a few minutes, I was.

To me,it’s plain that if your country is invaded, your army is repeatedly defeated, and your capital city is captured and occupied by an invader, you lost your war. California had been captured by John C. Fremont with a few hundred men, while Alexander Doniphan took New Mexico, then pushed further south, with a force of volunteers from Missouri. Coming in from Mexico’s east coast were more substantial U.S. forces under Winfield Scott, which included half the future heroes and villains of the Civil War (Ulysses S. Grant, William Sherman, Zachary Taylor, Jefferson Davis, Robert E. Lee and many others). The U.S. had more modern cannon and rifles, better-trained officers and men, and the impetus of the idea of Manifest Destiny behind its invasion. Mexico had religious faith and a still-developing sense of nationhood. The Treaty of Guadalupe Hidalgo in 1848 sealed the deal, and the effect on the still-emerging Mexican Republic was devastating. If you want an outline of how the conflict came about, and the details, try here.

However, for a Mexican apologist who dislikes the usual narrative, there’s a scapegoat and a camouflaging presence. His name was Antonio Lopez de Santa Anna (usually pronounced as Sant’ana).

This man was extraordinary. Vain, greedy, brilliant, charismatic, utterly unreliable and the father of a string of illegitimate children, he was also one of Mexico’s best military field commanders – intermittently, anyway – as well as serving as President of his country eleven times. Yes, eleven; though often it was for a very short period. He is best known for having led the assault and capture of the Alamo in 1836, and less known for losing the battle of San Jacinto a few weeks later and getting captured while in disguise, after neglecting to post sentries round his camp.

Some historians still speak of the early 19th Century in Mexico as the Age of Santa Anna, so large did he loom over his time. But his greed and corruption led him in 1846 to put out feelers to the U.S. government about persuading his country to cede territories the Americans wanted. Yet having got his deal, and a $10,000 advance, he promptly reneged, and went back to fighting for Mexico where he distinguished himself (on the whole) in the subsequent war. The U.S. lost 13,000 men in the conflict, more from disease than from combat, while Mexico lost up to 25,000.

Santa Anna was an inveterate gambler (betting on cock fighting was a favourite pastime), hence his trying for a hunk of cash. From this action, it has become possible to blame him for the loss of the war. If the U.S. did win by cheating and betrayal, then it wasn’t an honest victory, so its victory can be denied.

And that’s where I found myself Friday night – debating the true nature of fake news with some remarkably agitated Mexican ladies.

National pride is a touchy thing: I understand that. But as a history buff trained as a journalist, always looking for confirmatory evidence of wild assertions, I was frustrated. But I left the topic, and we talked about something else; though I forget what. I did learn the Santa Anna bribery story is presented in schools and in TV programs here with him being the Mexican Benedict Arnold, or perhaps as Trotsky was depicted in Stalin’s Russia. The reality of the man, which was beyond extraordinary, is glossed over, as he’s taken on ownership of much other Mexican failure and corruption over the years, not just his own.

He was a larger-than-life figure who made corruption into an art form, but I can’t see that he actually sold out his country. Perhaps he wasn’t offered what he wanted; perhaps he felt he was helping by cheating the enemy; or perhaps his vanity beat out his greed, and the man who’d been repeatedly decorated for valour and once lost a leg in battle came forth once more to offer what he had to his nation in its hour of need.

Either way, the war with the U.S. remains a scarring memory for Mexicans, and one they can’t expunge. A dozen years ago Absolut Vodka got into hot water with an ad showing how the map of Mexico would look in an “Absolut’ world, where the war had never happened. It still shows up from time to time, a practice I’m happy to repeat here. 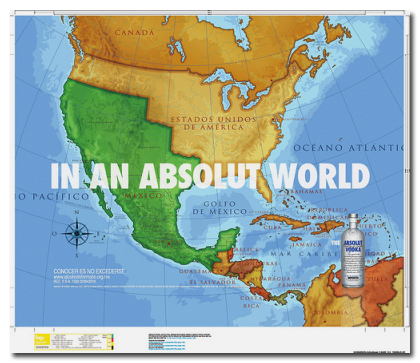 The absolute Vodka ad from 2008, showing how Mexico might have looked wthout the war.

But the fact of the loss, and the discoveries of gold in California in 1849 and gas and oil in various of the lost territories decades later, can’t be denied. Accordingly, Antonio has posthumously shouldered the blame for it. I’d be more sympathetic to him, but I have the feeling he’s somewhere off in the afterworld watching a celestial cockfight, and laughing his head off.

Besides, two of those women at the dinner table probably still think I’m just another disdainful gringo for not buying the story they’ve chosen to believe. I’m still ticked off over that, and Antonio’s actual graft and fiscal plundering don’t help me make my case.