Yesterday, I heard a buzzing in the plants outside the kitchen. I found it came from a cicada that was having trouble. I tried to help it up, but then discovered it had developed with one wing shorter than another. In an hour, it was dead.

Which was not a problem for the cicada population as a whole. This morning, they began that high-pitched chorus that, at its peak, sounds like an iron foundry. It was so loud, I considered getting the earplugs I keep for when the dogs in the village stage a 1.00 am bark-athon. 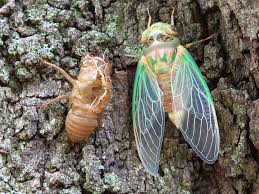 A cicada and its abandoned larval casing.

But I was glad to hear it, since it reminded me that most of nature was still doing its thing, unhindered.

In town, more stores seemed to have closed up, and the market was almost deserted. The Zocalo, the main square, is sealed off to prevent people socialising, and no-one can enter the market without first using hand sanitizer. 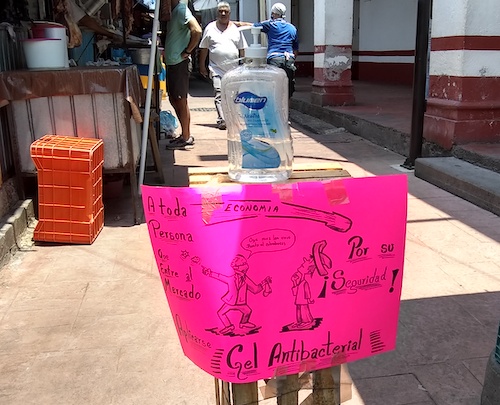 Before entering the market, you must use hand sanitizer. Last week, they had young people policing everyone who tried to sneak in with their hands unsanitized.

Emma, who runs Buenos Tiempos cafe, was happy to see me for the first time in more than a week, even if I only wanted to risk a take-out cappuccino. Like most store owners in Tepoztlan, she has laid off her staff and is managing on her own.

I bought an oatmeal cookie that was dry, because she’s sold so little recently.  I hadn’t the heart to complain. This must be the toughest time she’s ever faced.

Back at home in the village, I noticed that the plum tree on the other side of this property is already coming into full leaf. There are even tiny plums forming in the branches.

The plum tree is putting forth leaves, without benefit of rain.

We’ve had no significant rain for months, and nothing at all since March. How does nature manage to re-start when there is nothing to moisten the soil, or to signal to cicadas that it’s time to come out? I don’t know, but it happens, and it’s happening now.

The people manning the village “frontier barricade” are still there. Last evening I saw they had a bamboo rod to make a more visible barrier to incoming traffic. There’s often a small truck parked by the side of the road that they won’t admit. People here drive around collecting scrap metal, or selling bread or fruit, but they’re not being admitted to Amatlan. It’s hard for them.

Oddly, if you rent a place that you hardly ever use, but have a signed lease, you can still get in. I was out getting a tlacoyo for lunch (a folded-over taco, basically) when I passed a gaggle of rich hippie kids. Their tattoos were very professional, and their quasi-Indian clothing was clean and nicely finished. And until I said my “Buenas tardes,” which we do here, they were going to ignore me, like all the other rich hippie kids who come in on weekends.

The quarantine continues, but it’s selective. More reason, I felt, to feel fed up.

This afternoon, while I was in the bedroom cleaning, I heard what sounded like another stranded cicada, but in the living room. It turned out to be a lovely green songbird that had flown in through the open door, and was knocking itself out against the window. When I used my hat and my hand to trap it, it went limp, as if it assumed its time was up.

Moments later, it realised it was outside. I removed my restraining hand, and it shot off back to freedom. This happens once or twice ever year, because I leave the living room door to the patio open for two of the dogs to come in and out. It’s a little tense, since injuring small birds’ wings is easy to do. But each time it also makes a lovely moment of contact with the wild world that lives around my house, with the added pleasure of exhilaration as the creature flies free.

Then, yet another “Bill Gates is a terrible murderer” meme showed up on Facebook. In this episode, the tireless evildoer had, apparently, taken over one of India’s health agencies and forced children to receive a flawed polio vaccine, for which he was personally responsible. Many had died.

When I checked, I couldn’t find any actual source for this story beyond the meme. The fact that viable and safe polio vaccines have already existed for decades should have been the clue, but paranoid fantasies about this latest supervillain are apparently helping some people cope with the tension of the lockdown.

I kind of understand this. Simultaneously, I’m left sad and frustrated that so many think spreading nonsense is how they can “help.”

And now it’s late afternoon, and I’m sitting in my living room, lazily writing a blog post and looking out the windows. The Sun is shining on the cliffs opposite, creating that effect that makes the rocks, with their hundreds of partly eroded strata, look like the intricately carved temples of Angkor Wat. It’s hazy today, from dry-season dust and some farmers who are burning the stubble in their fields, but the detail is still there.

The effect of “temples” is lost in a photo, but the strange beauty of the rocks is still evident.

The natural cycle goes on. And at some point, our human world will also pick up. Haltingly but steadily, with a lot of accumulated hurt, it will come back to something less scared, angry and bored. And perhaps the online mob of angry people, who wield memes instead of pitchforks, can calm their fevered imaginations.

Freud’s famous line comes to mind in this context:

“Much will be gained if we succeed in transforming your hysterical misery into common unhappiness. With a mental life that has been restored to health, you will be better armed against that unhappiness.”