April 8, I had a post (Othering) about the barricade some people from my village had put up. The idea was to keep out anyone from other local communities potentially carrying the Covid-19 virus. The flaw to my mind was the obvious one that the disease doesn’t come from “them” (hence my title), but from all of us behaving unthinkingly and carelessly. May 19, my post (Oh, I’ve Seen Fire…) was about the first serious forest fire of the season here.

The fire is now out, though water-bombing helicopters were still finishing off its last flare-ups this afternoon. And to the relief of many of us, after a violent altercation yesterday, last night it was decided to take down the barricade. People from here can now move into town freely, without “activists” from the community  interrogating or inspecting us. The barricade might have helped protect us, but with only eight official cases in a municipality of 42,000, we’ve so far dodged the bullet.

Which brings me to a different concern: the swallows. They’re here, and they want to nest, but the rain isn’t coming. 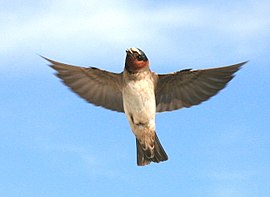 We did have a few showers earlier in May, and as a result puddles appeared. And when there are puddles here, there’s mud. But then the mud dried up, and while we’d be happy to have a cooling rainstorm or two, it’s stayed dry for two weeks. As a result, the swallows have not been able to rebuild their nests and lay eggs.

As far as I can determine, our swallows are the same cliff swallows from the Petrochelidon pyrrhonota species as the famous ones that come each year to San Juan Capistrano in California. Like those, they build their neat nests on the side of houses, mostly under eaves or the roofs of balconies. They’re relatively unafraid of humans, building just above arm’s reach, and you can watch the parents going in and out with food for their ravenous youngsters. At the first house I lived in here, we had a nest on the wall and the dogs would go crazy barking at the birds, which flew in beyond their ability to jump.

I’ve always regretted swallows have never set up house at this location. Yes, they poop on the ground a bit, but since they rear their young in the rainy season, the rains do a good job of cleaning that away. Their presence implies a blessing on any house they adopt as “theirs.”

But so far, as noted, the parents are mud-deprived, and can’t either build new nests or restore old ones. I see them swooping around, and I even tried to photograph a couple, but they move too fast for anything but a specialty camera with a high-speed lens. The best I could do was dig out a grainy photo of the nest at the old house.

The nest here was built using an outdoor light-bulb as a support.

Maybe I should have asked one of the helicopter pilots to water-bomb the village. The kids here love to watch the choppers on fire-dousing missions, and the birds could finally have started on their most important annual chore: developing avian real estate. But I’m just a little wary of community activists after five weeks of the barricade.