My dog Rem noticed the sound first last night, and once he shut up whimpering and growling for a few seconds, I could hear it too. I tried to calm and reassure him.

He wasn’t convinced, and kept whimpering for ten minutes. But eventually had to abandon his desire to hunt down this intrusion into our shared space, and went back to sleep. Dogs are super alert to sounds, but they can also shut them out very efficiently.

Any human who comes to a place like Amatlan has their senses awakened in ways that aren’t possible in an urban setting. My next-door neighbour keeps a pig, which makes the most extraordinary noises as well as, at times, producing an astoundingly pungent smell in its sty. Another neighbour has set up a poultry coop, and anyone who walks by it gets a whiff that certainly jolts the brain awake.

But sounds are perhaps the things I notice most here. Because we’re on one side of a valley, I can hear the rain failing on the opposite side, 400 yards away, before it falls here. Thunder, which we had with this afternoon’s rainstorm, likewise echoes off the hillsides, and can sound like the very knell of Doomsday.

This morning, I needed to listen hard for two artificial sounds. It was Wednesday, which is when the garbage truck comes around. And, our propane cylinder had given out, and needed replacement. 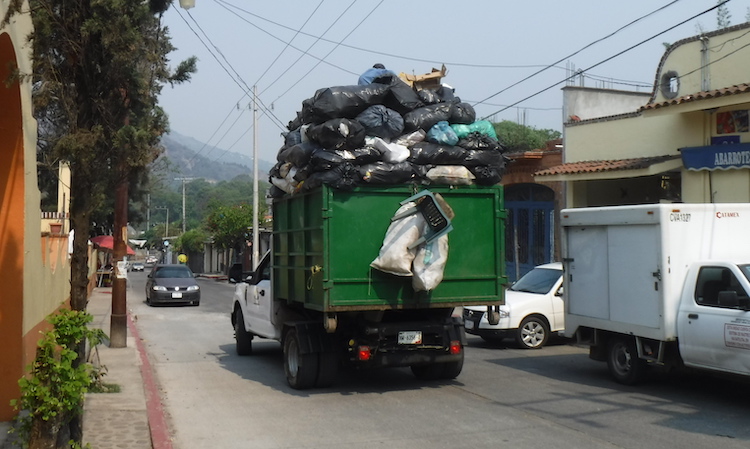 The loaded garbage truck heads back into town through the nearby community of Huilotepec.

My house is about 180 yards from the street, and bends in both the lane and the street itself complicate any sense of direction. It used to be that the garbage trucks here were equipped with tinny sound systems, and they’d play the Mexican hit tunes from decades ago as they came by. You could hear them three or four blocks away. Now, the awful music is gone, and the drivers simply honk as they pass on the street. But determining, from 180 yards away, where the truck is, or will be, isn’t easy.

Also, people here honk because they’re outside Uncle Pedro’s house, and have come to pick him up. Or because someone else’s vehicle is blocking their way. Or to say hi to another driver. Honkish is a tough language to interpret, although the garbage guys do beep to a slower rhythm than agitated car drivers.

The gas trucks, two or three in number, come to the village in the morning, and occasionally later in the day. People here have employed propane for cooking and heating water for a couple of generations, and because thunderstorms easily cut our electrical power, we all still need and use it. The trucks are equipped with something resembling a car alarm to alert their customers, and while few people have car alarms here, some do, so again there’s the chance of confusion.

Anyway, here I was at 8.30, down on the street so as not to miss either truck. I was in time for the garbage guys, but the noise they make (their trucks don’t run quietly) made it hard to hear the propane vendors’ not-so-dulcet tones, as they passed by on the other side of the village. And I realised how I was straining to use my ears in ways I never used to do when I lived in a city.

The road from town ends near my house, with only footpaths going beyond through the hills. This is one reason there’s extensive birdlife here, and a lot of birdsong. There are always dogs barking at each other, or at passing cows or horses, and around 4.00 am the roosters start up. Humans, too, yell at their kids a lot. Someone is always building or fixing a house, so there’s the sound of power tools for much of the day, as well as banging and thumping of various kinds. And because my house is above the level of the main village, all these noises easily reach here.

I’m grateful that I still have good hearing, even if that means I can’t exclude much of this noise. This village is rarely a silent place, because it lacks the background noises of larger communities, which people living in them naturally learn to ignore. But I’m far more aware of all sensory inputs here than I ever was in Toronto.

The village symphony places significant demands on the ears of both dog and human. It also makes me wish that both the garbage vendors and the propane people had chosen something less unlovely to alert their clientele that they’ve arrived.

But that’s Mexico for you. It’s never likely to hold back on the noise. We live with it, or we at least learn to hold our peace on the topic.