This year, our rainy season appears to have started a month early. Normally it hits in the later part of June, but a small storm on the night of April 30 began an intermittent pattern of rainfall that, combined with lightning strikes, has twice knocked out our electrical power.

I’m not a great fan of the rains, which tend to breed flies and mosquitoes, as well telling the plant life in the dogs’ corral that it now has permission to overgrow all the available space. This year, I also wonder if the drop in temperatures they bring, combined with less sunshine, will enable to virus to spread more easily. Covid-19 is a very strange disease, as we’ve all read, but there are indications it doesn’t like heat or sunshine, which we’ve had in abundance since February. That advantage now dissipates.

That said, the rain fills our cistern, running through a triple filter system that keeps out vegetation and small bits of stuff in general. That means we don’t need to buy non-potable water for a few months. It also produces aesthetic effects such as evocative cloud formations, or full-on Wrath of the Gods lightning storms. Those terrify at least one of the dogs, and I’m quite likely to find she’s disappeared yet again, only to show up cowering under my bed while sharp claps of thunder resound off the cliffs surrounding the village. 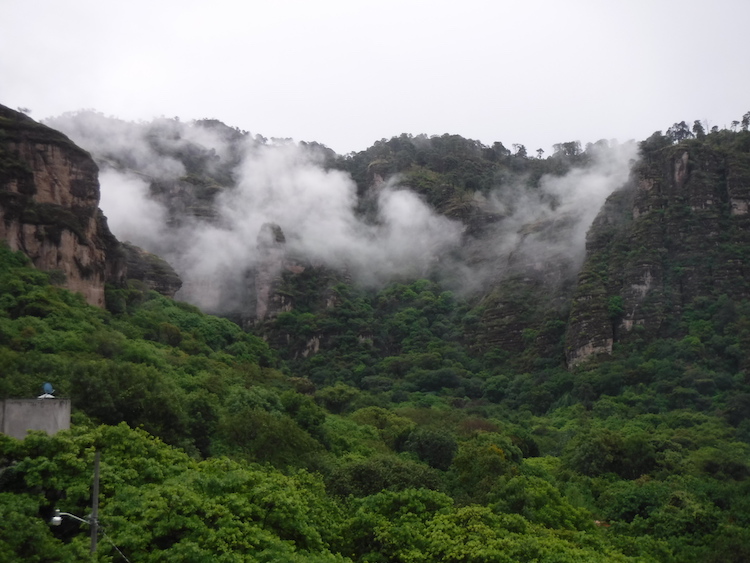 This May, after a long dry winter, there were fears of a vintage year for forest fires breaking out on the mountains behind us. That possibility is now drastically reduced.

While the barricade outside the village is still manned by solid numbers of volunteers, 24 hours a day, there is anticipation that the town of Tepoztlan might relax its police-enforced separation from the rest of the country in a few weeks. That would mean the barricade, which is legally a very dubious enterprise, would follow suit. Anticipation is in the air along with frustration, but I’m sure we’re not yet ready to drop our protective measures.

And this assumes, of course, that the drop in temperatures, combined with possible relaxed social and commercial restrictions, doesn’t bring a surge in infection. In a week Tepoztlan has gone from two cases to five, which is not a lot, but is also isn’t encouraging. Everything this year is in question.

Hence, the rains themselves are reassuring, simply because they remind us we’re connected to a grander cycle of nature. That cycle doesn’t follow an exact calendar, but its existence, demonstrated most recently by last night’s brief storm, is one of the things we’re all clinging to in this bizarre, disorienting spring.