The earthquake that hit central Mexico on September 19, 2017, caused the most loss of life of any to hit the country in this century. The official death-toll was 370, but 6,000 more were injured as buildings collapsed in many towns and villages outside Mexico City. Some people, obviously, didn’t survive their injuries; there are also persistent rumours about poorer, undocumented people who didn’t survive the day.

The magnitude 7.1 temblor brought down many old structures as well as new ones that weren’t constructed according to quakeproof codes. Particularly hit were the monastic churches or conventos around the volcano Popocatepetl, which together constitute a UNESCO World Heritage site dating back to the 1500s. There is one in my town of Tepoztlan, the Convent of the Virgin of the Nativity, dating to the period 1555-1580, and another in the nearby town of Tlayacapan, dedicated to St. John the Baptist. 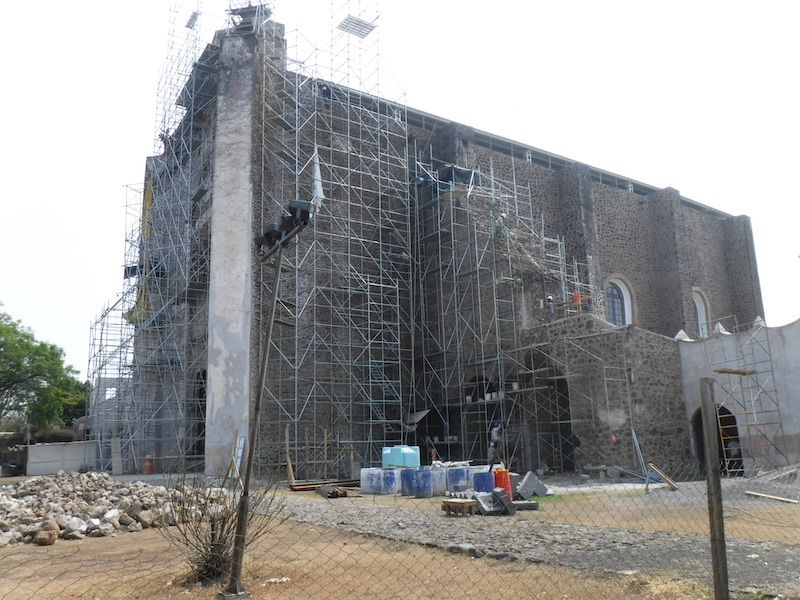 The Tlayacapan convent of St. John the Baptist under repair.

The monastery in Tepoztlan was built on a massive scale, yet only four or five monks lived in the place at first. The expected uprisings didn’t happen in central Mexico, and the forced conversion of the native people went ahead with few glitches. The old religion with its multiple gods and goddesses persisted underground for many years, as a folk-faith, but the Cross essentially supplanted it.

Mexico has a complex relationship with the Roman Catholic Church. The religion arrived in the wake of Hernan Cortes’ conquest in the 1520s as a triumphalist follow-up to the military campaign. Some of the monks, notably the Franciscans, adopted a gentle approach, and others, notably the Dominicans, didn’t. For centrally run societies like those of the Aztecs and other MesoAmerican kingdoms, the defeat and the death of their leaders, followed by the epidemics that came with the conquistadors, resulted in a collapse of morale.

Later, the Virgin of Guadalupe largely supplanted the worship of Jesus Christ, though hardly any Catholics will admit this. While she has her own miracle story, she arose largely as a transformed version of the Toltec goddess Tonantzin, and some people see her in this guise this today. Christ is respected, but Guadalupe is loved. She is the glue holding much of Mexican society together, and no church in Mexico lacks a copy of her image.

The monasteries were seized by the state decades ago, and remain state property, even though they perform their traditional religious functions. The Tepoztlan one has served at times as a prison and a stable, and was falling into ruin after the Mexican Revolution ended a century ago. However, then-President Lazaro Cardenas saw it in the 1930s, and opted to restore it. Parts of the surrounding structures were lost, but the cloisters and monastic quarters today house a museum, and the church was usable … at least until September 2017.

No-one was sure, after the roofs began to cave in and outside stonework fell to the ground, if the monasteries could be restored. Such a project is very expensive, and a calls for special expertise to work using the old construction methods. Naturally, there are people who object to so much money going to restore old religious buildings, when the state is technically secular to the point of official atheism. But tourism is money, and Mexico without tourism would be …well, Panama North. Not too many people visit Panama. Thus, the money was found.

Restoring the Convent in Tepoztlan.

So, stone by stone, and roof-beam by roof-beam, the damaged monasteries are being restored. Interior wall paintings are lost, but the appearance of the actual structures was well documented before the ‘quake hit, and is being faithfully replicated.

Like all old buildings, they need constant, ongoing maintenance. I wonder, each time I look at a rack of scaffolding with a man perched on it, what will be done if there’s another massive temblor. I thought this five years ago, when the towers in Tepoztlan were being repaired by men on precarious wood gantries. Mexico always rebuilds, but there’s a suspicion a new fault-line might have opened up or widened 20 months ago. If so, there’s a question mark over the future. Years of renovation efforts can end in seconds if a fierce enough shaking happens.

But Mexico is, depending on your standpoint, fatalistic or philosophical. Mexicans might hate their governments, their presidents and their smug richer class, but they love their ‘Mexicanidad,’ their Mexican-ness. And even if the church disgusts them as an institution, they will still want to see its monuments rebuilt, even if they secretly detest the past oppression those walls represent. In a way many western societies seem to have forgotten, they grasp the living power of symbols, and how essential they are in a world that’s losing its footing more every year.

Or, they know that to lose the oppressor’s monuments is also to forget the oppression.