The last three Mexican Presidents are not looked on as howling successes. Andres Manuel Lopez Obrador, who is acronymmed as AMLO, and came to power in 2018, will probably go down as the worst of a weak bunch.

He’s had some international press for his most stupid remarks, including telling people to go to fiestas and continue eating in restaurants during this emergency. Having hugged as many people as he could reach at public events, he refused to quarantine himself, for fear that it would allow conservative opponents to take over while he was sequestered. The tale gets still sillier, but you probably have the point by now.

There are also well verified stories about him pulling funding from health programs last year, while presenting himself as the man who cares about poorer and indigenous people. An estimated 10,000 medical professionals were laid off across the country. He looks, by the way, about as blond as I do, except he has more thatch on his scalp. Mexican Presidents are rarely stellar, but a surprising number have had remarkably good hair.

President Lopez Obrador – the man with the right hair.

I dwell on this man because people are starting to wonder if a coup might be necessary. Almost all coups are really bad, of course, and cause lasting damage to the countries in which they occur. But I caught the gossip this afternoon, after a trip into town, and wondered if it could happen. The country has no clear leadership – even a leader who postures and struts and moans about fake news, as I’ve heard might exist in at least on other place.

I’ve explained previously that people over 60 are supposed to stay home, and I’m 70. But there is no enforcement of this. My supposedly sneaky food-shopping trips into town only raise eyebrows because I wear a facemask; today I saw only eight or nine people with them on. Two were the people who “snuck” into town with me. The mixed messaging from the top has made people here decide to ignore any sense of alarm, and wait to see what God requires of them.

Now, I expected something like this, and I’m not shocked. As I’ve written already, I appreciate their attitude, as well as their refusal to try living on no income, private or governmental. But as the tally of Covid-19 cases rises, I keep wondering how people are going to manage the impact. The President is enabling denial, not trying to abolish it. The face-masks will come out here, but far too late to make much difference.

The one statement I keep hearing that does drive me bats is, “We’re probably safer here than in other places.” It’s obvious nonsense, since it only needs one person to transmit the virus, and away we go. But when the guy at the top indicates the situation’s not all that serious, then no-one here is going to be serious. Most of the state governors realise the risks, and there are some draconian measures being implemented (not always sound, I add), but “The Autonomous Republic of Tepoztlan” is going its own way, convinced it is uniquely admired and blessed by the Creator that endowed it with such splendid mountain scenery. 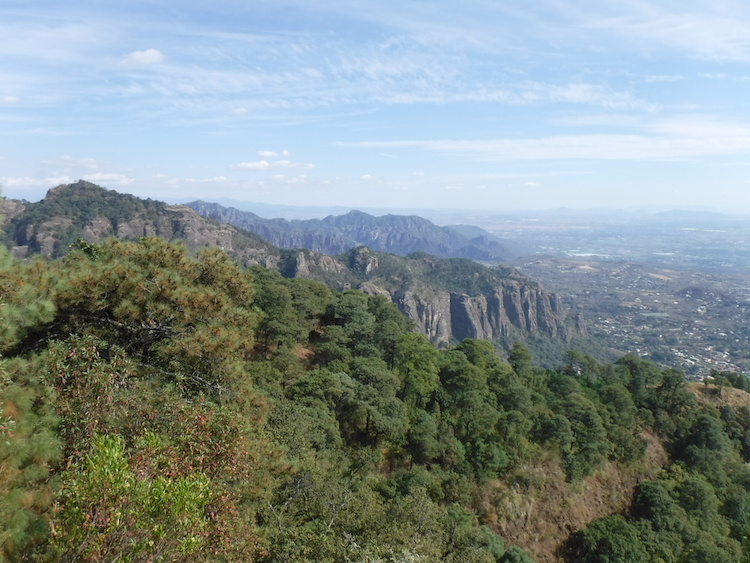 The mountains north of Tepoztlan, taken from one of the highest.

The old journalist in me is fascinated by all this: the pride, the self-sufficient attitude and the sheer myopia of the approach. It’ll be a marvellous tale to tell later. The old guy inside me is nervous.

Tonight, though, I simply wonder whether that man in the Presidential residence (the Palace is only used for certain formal events now) really thinks he knows what he’s doing. Or whether, as a believer, he’s assuming God, or the Virgin of Guadalupe, the nation’s Mother-figure, will sort it all out for him. For the sake of the currently un-masked, I’d prefer he was an atheist.